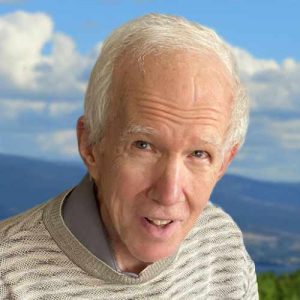 Ross (Ernest Ross Alfred Joseph) Labrie will be remembered with sadness passing at the age of 85.
Ross is survived by his loving wife Gisela whom he married in 1966; and by his sons: Mark, who is in business in Australia; and Steven, who is a school administrator in Kelowna. He is further survived by his brother Warren; his grandchildren Kyla, Danika, Cohen, Josh, and Charlotte; and his nieces and nephew. Having grown up in Montreal, Ross went to McGill University for his M.A. He obtained his Ph.D. at the University of Toronto, and was the author of a number of books on American Literature, notably Catholic American literature. He became a Full Professor at the University of British Columbia, retiring in 2001.
Following his retirement, he was invited to join the faculty of Arts One, an interdisciplinary course that Ross believed was a model for how university courses should be structured and taught. Ross loved to travel. When not camping or cruising, Ross spent his vacations with his wife and sons in the Caribou where he developed a love of B.C., which reminded him of summers in the Laurentians north of Montreal. In Vancouver, he returned to the ice skating of his youth and became an active member of the Newman Association. This past year Ross and Gisela decided to move to Kelowna to be close to their son, Steven, his wife Allie, and grandchildren Kyla, Danika and Cohen.
Ross was a beloved father, brother, grandfather, uncle, mentor and friend. His presence will be missed, but the legacy of his kindness, wisdom and quiet strength will live in the memories and hearts of all who knew him.
His funeral mass will be held Monday, November 22, 2021, at 10:30 AM (PST) at St. Charles Garnier Catholic Church in Kelowna, BC. However, due to the current pandemic restrictions it will be by invitation only. The family would like to invite all who want to pay their respects to join by Livestream.  A recording will be made available to view shortly thereafter.
If you wish to send a condolence, post photos, or share a memory, please scroll down the page to the area called “Condolences”.


The service for LABRIE, Ross is scheduled for November 22, 2021, at 10:30 AM (PST). Below you will find the map for the service location and the contact information should you have any questions.