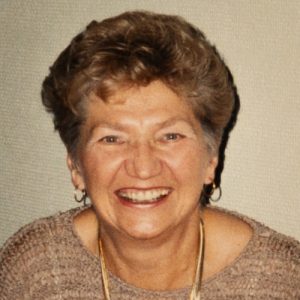 Irene Laidlaw, affectionately known as “Ike”, passed away peacefully on November 18, 2020, in her home at the age of 85, with her loving family by her side.  She will be sadly missed by her daughter Wendi (Ron) Harding and grandchildren Jason Harding and Paige (Jeff) Cox, all of Kelowna; as well as her son Barry (Sandy) Laidlaw and grandchildren Cassidy Laidlaw and Quinn Laidlaw of Calgary.  Irene’s son Randy, who passed away in 1984, will be lovingly embracing her with his long outstretched arms once again.  Irene’s husband Richard “Dick”, who passed away in 2010, would have celebrated his birthday on November 19th. It is our belief that Ike wanted him to have the greatest birthday present she could give – to be by his side again forever.

Irene was the youngest daughter of Ellen and Albert Kurtz; sister to Dorothy Hall (Ron), Rita Tracey (Jim), James Kurtz, Ralph Kurtz, and Gerald Kurtz (Doreen); and sister-in-law Carol Sanvido, all who have passed before her.  She is survived by her only living sibling Wilfred (Dorothy) Kurtz; sisters-in-law Helen Kurtz and Ruth Kurtz; brother-in-law Reno Sanvido; as well as many nieces and nephews – all of whom will miss Auntie Ike dearly.

Ike was born in Guelph, ON, on August 8, 1935 – the youngest of 7 children.  When Ike was in her late teens, she worked at the Sally Shop in Guelph which is where she met her future husband and eternal life-mate Dick, a strapping young advertising delivery boy for the Guelph Mercury.  They married in 1954 in Guelph and then moved to Kirkland Lake, ON where they started their family of 3 children.  The family then moved around, going back to Guelph and then Trenton ON, before “heading west” to Kamloops, BC in 1969.  Ike, Dick and Barry moved to Calgary, AB in 1977 with Ike and Dick finally retiring to Kelowna, BC in 1990.

In all the cities Ike lived, she not only carried on a professional career but contributed tirelessly into her volunteer efforts with Beta Sigma Phi – an international organization embracing Life, Learning & Friendship – qualities that she lived daily.  She originally joined Beta Sigma Phi in 1967 and over the past 50 years has held every position from President to Member Advisor multiple times. Her extensive contribution to Beta Sigma Phi was recognized with many honours including, Woman of the Year and the ultimate International Award of Distinction. Beta Sigma Phi will miss a truly exceptional lady and giving member.

Give, give, give was Irene’s mantra in life.  Tirelessly through her actions, reaching out to positively impact everyone she touched.  Doing for others and not asking for anything in return.  Do all the work, let others take the spotlight, then stand in the background with humility and honour.  The world has lost a very special person. She has made all of our lives better – for that we will be eternally grateful.

Due to COVID restrictions, a private family Funeral Mass will be held at Immaculate Conception Church in Kelowna, with Interment at the Kelowna Memorial Park Cemetery to follow, where she will be laid to rest beside her husband Dick and son Randy. Date is yet to be determined.

Send Condolences
Send Flowers or a Sympathy Card
Heart and Stroke Foundation or the BC Cancer Foundation Link: www.heartandstroke.ca, www.bccancer.bc.ca