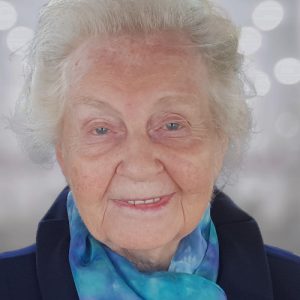 Our beloved mother, Mabel Langmo, 92 years, passed away peacefully at Hospice House Kelowna on January 31, 2021. Born January 23, 1929, in Halkirk, Alberta, Mabel was an extraordinary woman. There are many in the community who will deeply mourn her passing as hers was a life of love and compassion.

She was sadly predeceased by her husbands Wentworth Smythe, the love of her life and father of her children, as well as Herb Schultz, and Jim Langmo; her daughter Carol York; her sisters Violet Bradshaw, Marion Yates, Grace Webster, Mary Johnson, and Dorothy Brennan; and her brothers George, Walter, Joe, Charlie, Pat, Carl, and Hugh Johnson.

The family would like to mention their appreciation to all medical staff at Kelowna General Hospital, Cottonwoods, Hospice House Kelowna, and the Interior Health caregivers who came to her home, as well as the many wonderful friends and neighbours who also came by to offer their help.  And, to Dr. Hoppe, they would like to express their sincere gratitude for the above and beyond effort that went into Mabel’s care.

For those who want to honour Mabel’s life please join her service online by Livestream Monday, February 8, 2021 at 1:00 pm PST. Due to the Covid-19 restrictions in person attendance will be by invitation only. In lieu of flowers, you may make a donation to the charity of your choice.

THIS SERVICE WILL BE LIVESTREAMED/BROADCAST ON MONDAY, FEBRUARY 8, 2021 AT 1:00 PM