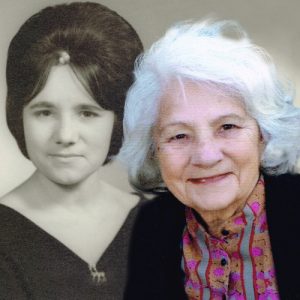 Hilda studied hairdressing in Bremen, Germany, working for Herta and Hermann Märtens, who took her in as a daughter. The three Märtens’ moved to Canada in 1957 and settled in Thunder Bay, Ontario, where they opened the Grenville Beauty Salon.

Hilda married Hans Joachim Lauenstein in 1966. In 1977, the family traded the cold Ontario winters for hot Okanagan summers when they moved to Kelowna, BC, where Hilda became known as Dunja.

Dunja was beloved by the many people she knew through her various activities, including mahjong, hiking, various German Clubs, as a long-time member of the Westbank Yacht Club, and for her famous anniversary parties every August. Dunja loved the water and was an avid swimmer. She was particularly proud of her achievements in Kelowna’s annual Across the Lake Swim.

Dunja will be lovingly remembered by her husband Hans Joachim; sons Misha (Dianne) and Rene’; her daughter Tanya (Noah); grandchildren Nikolas Paquin and Maddox Normandale; and remaining members of the Jüttner family in Germany.

Memorial plans have yet to be decided.