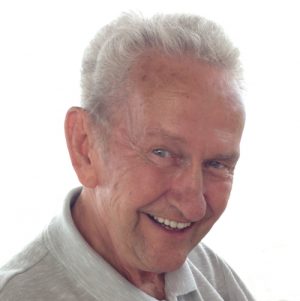 UPDATED SERVICE INFO: A Mass will be held in his honour on Monday, October 12, 2020, at 9:00 am at Immaculate Conception Church, 839 Sutherland Ave, Kelowna, BC. Due to the COVID-19 restrictions, it will be limited seating of 50 and on a first come, first served basis. For those who can not attend it will be Livestreamed at icckelowna.ca

On September 1, 2021 a Graveside Memorial will be held.

Beloved Grandfather, Father, Husband, after a lengthy illness Henrie has gone to be with his loving family in Heaven on September 1, 2020.  The last of a family of 12 we know he was happy to go to them as he had his arms stretched out in a hug, speaking French and smiling, he is in good hands now. He is survived by his loving wife Marion; his daughters Theresa (Ryan) Naka and Debra Dotschkat; his sons Tom (Kerri) Lessard and David Lessard (Nicole Prevost); his grandchildren Blake (Bre) Naka, Jamie Naka, Holly Lessard, Rachel Lessard, Amanda Dotschkat, Bobbie-Lee (Tim) Hirtz, Cayleih Lessard, and Emily Lessard; and his great-grandchildren Lux Naka, Liv Naka.

Henrie was a fighter to the end and will always be remembered for his sarcastic sense of humor, competitive game playing, love of his kids, grandkids, great-grandkids, and the magic tricks he did to entertain them.

Born in McLennan, Alberta, he moved to Vancouver, BC with his family where he met his wife Marion. They married on April 18/59 in Surrey, BC and had 61 years together. They started their family there with Tom and Theresa, and then moved to Golden, BC where they added Debra.  The sun brought them to Kelowna where they settled for his remaining years and had the final of four children David.

Henrie went to work as a Manager for Gorman Bros Mill for 12 years and made many lifelong friends there.

Always wanting to learn, in 1978 he went back to school to get his GED and then go on to the University of Victoria for a Bachelor of Arts degree.  During this time he was able to develop his passion for painting and all forms of art.

Never one to have idle hands, he loved to keep busy, so on top of working he also had a ranch where we raised cattle, pigs, horses and chickens before moving on to being an orchardist.

Henrie was very active in the Catholic Church and could often be found flipping pancakes for Knights of Columbus or doing adoration.  He loved volunteering in the gardens at Cottonwoods, which is fitting as that was where he spent his final days.

We would like to thank the staff at KGH and Cottonwoods for taking such good care of Dad over these last 10 months.