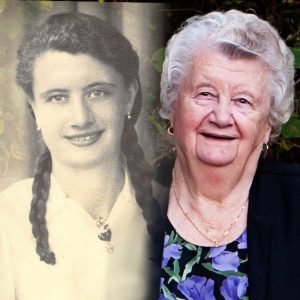 It is with a heavy heart that we announce the passing of our dear mother, grandmother, and great-grandmother Ana Loncaric (née Skusek).  In the early morning hours of April 25, 2020, the Lord took her home.

She was born October 1, 1930, in Doblice, Slovenia.  In 1950, she met and married the love of her life, Anton “Tony” Loncaric.  Two beautiful daughters were born, and then in 1957, Tony left for Canada to make a better life for them. In 1964, Ana and the two daughters were reunited with him in Canada.  Thereafter, their third daughter was born.

Ana and Tony first settled outside of Slave Lake, Alberta.  In 1975 they moved to Kelowna, BC and made it their final home.

Ana loved everything about life.  Her family and faith were her everything.  She taught us to love, live and forgive.  She enjoyed her garden and flowers, especially her geraniums.  She shared the bounty of her vegetables and fruits with anyone who would take some.  She had a passion for petite pointe and she leaves behind many tapestries that will be cherished by her children, grandchildren and great-grandchildren.  When her eyes began to fail, she made tapestries for those yet to be born.  She loved to laugh, and to play cards.  Many memories were made at the kitchen table as we played board games or card games.  She truly was an inspiration to not only her children, but to many others who came to know her simply as Staramama (grandma).

“Mom, we miss you and love you. By God’s grace we will see you again.”

A private family service will be held on Friday, May 1, 2020, at 1:00 pm at Corpus Christi, with Father Pat officiating. Interment to follow in Kelowna Memorial Park Cemetery. If you wish to send a condolence, post photos or share a memory, please scroll down the page to the area called “Condolences”.


The service for LONCARIC, Ana is scheduled for Friday, May 1, 2020, at 1:00 pm. Below you will find the map for the service location and the contact information should you have any questions.

Due to Covid-19 gathering restrictions the service is a private family service, you are invited to view the service via livestream.