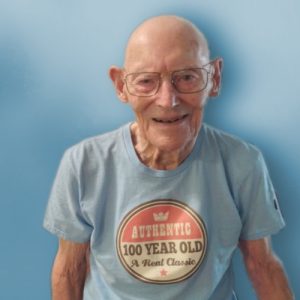 “Les” John Arthur Lester Lundstrom passed away May 30, 2021, at Kelowna General Hospital with family at his side. Thank you to the staff from Emergency and 4 East for his care; special thanks to the hardworking staff at Sandalwood Retirement Resort for their care and compassion during this unprecedented time.

Les was born in Czar, AB, on August 26, 1920, to immigrant parents from Sweden. Along with four sisters, he was raised on a farm in Hughenden, AB. At age 15, he left home to work for the highway department, followed by work on a larger farm and on threshing crews. His next job was with the Alberta Dairy Pool in Sedgewick, AB, where he had a cream route. It was there that he met his bride, Irma. They married in Camrose, AB and soon after took a train to visit friends in Kimberley, BC. They liked it there and Les got a job with Cominco, and that became their home for the next 30 years. In 1976, they were lured to Kelowna, BC to be near family and grandchildren. In 2014, Les and Irma moved into Sandalwood Retirement Resort where they enjoyed meeting many new friends. There, he was nicknamed “the dancer”. After 74 years of marriage, Irma passed away in 2019 and his Sandalwood family were very supportive and kind.

Les always loved to garden and took pride in his yard. More than once he was presented with the “Green Thumb” Community Improvement Award.

Music and dancing were an important part of his life. From a young age he played the fiddle, guitar, harmonica, sang and yodelled. He played at dances, on the radio, at the senior’s home, and also at the Calgary Stampede, and even at the Grande Ole Opry, a highlight while on a trip.

He saw so many changes in his life, and we enjoyed hearing about the “good old days” on the prairies and how mining was done in Kimberley. He maintained an interest in local and world affairs right to the end. He was the ‘go to guy’ if you forgot specifics about an event.

Les always wanted to reach 100 (you did it Dad!). He was a cup half full kind of guy who always chose to look on the bright side and live one day at a time.

Dad, Gramps, Poppa will be missed by daughter Brenda (Rick) Langhorn; grandsons Darin Langhorn and Darcy (Amanda) Langhorn; and great-grandchildren Cory, Claire and Eric Langhorn (aka ‘the little squirts’). We were fortunate to have him with us for so long.

In accordance with Dad’s wishes and Covid 19 restrictions, a private family graveside will take place on June 11, 2021.