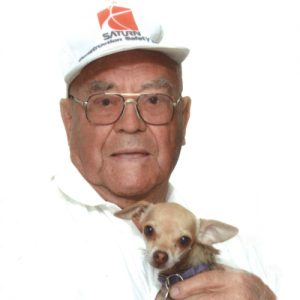 On Thursday, September 16, 2021, Rudolf Lux, husband, father, grandfather, and friend passed away at the age of 96 after a short decline in health.

He slipped away as he lived… on his own terms, and quietly in his sleep. Although, his other wish was to live to 100.

At 96, you’ve likely done all you could ever want to do, and our father lived his life to the fullest.  We immigrated to Calgary, AB from Germany in 1954, and just a few years later, in 1957, Dad moved to Fort St. John, BC, where he started to build what became a successful masonry contracting business, Lux Masonry Supplies Ltd.  We followed him in 1959.

Over the years Lux Masonry helped build and shape this frontier town and many of his builds are still very much part of the landscape, as are the hundreds of brick and stone fireplaces throughout the district.

He sold and retired to Osoyoos, BC in 1955.  There he made many friends and was able to continue living comfortably into his late 80s due to help from people like Liz White, Osoyoos Credit Union. In San Felipe, Baja, his friends and neighbours, Harry and Judy Fries, helped him to enjoy a wonderful time in the winter sun. He loved to travel (Europe, the Philippines, Hong Kong, Mexico, and Hawaii) and hunt and fish. Most of all he loved hockey. Flying to Moscow to take in the 1972 CANADA/RUSSIA HOCKEY SERIES with a few of his besties remained a highlight.  It was hockey to the very end; even with macular degeneration, enough dementia to keep it interesting, and his ripe old age, the game remained everything.

From his lovely home hear the lake in Osoyoos, he began to spend winters in the sun: Yuma, San Felipe, and on cruises (in a tuxedo, there to dance with the ladies… something he was always very good at).

At the end, he missed his lifelong friends very much.

Left with all the memories are daughters Emmy (Joel) Mills and Irmgrad Lux, his caretaker the last many years. Grandchildren Stephanie (Luke) and Tyler (Karla) loved him dearly and have many “Opa stories“ to tell their children, Rowan, Sawyer, Jaxon, and Lyla, who regrettably did not have nearly enough time with Rudy. Nephews Rudy & his wife Lordis, and Erwin Lux also share all of our memories. Of very special mention are his friends Lisa Bell, Peggy Millsap, and Christina, friends of many decades, who were there to reminisce about the past to the very end. Never to be forgotten is Maxie, his beloved Chihuahua, whom he accidentally left behind in Fresno, California, and who was found by friends who searched every dog pound, as well as posting pictures all over the internet and city. Dad’s dear friend Mary Wetherill initiated the search. Dad and Maxie had a very special bond.

Rudy was predeceased by his ex-wife, and our mother, Emma, his brother Albert, and sister-in-law Maria.

We thank his caring doctor, Dr. Erasmus, and appreciate, beyond words, the patient and kind care he received in Apple Grove and then in Cherry Court at Brandt’s Creek Mews.

A family celebration of our father’s life will be held privately.