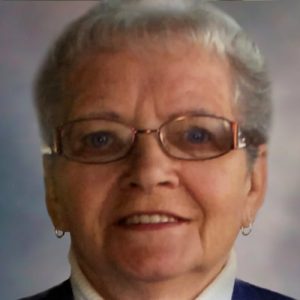 It is with heartfelt sadness we announce the passing of our mother Dorothy Maciak after a brief illness with cancer on May 5, 2022, with family by her side.

Dorothy was born on October 2, 1937, at home on the farm in Belloy, Alberta. She was the third of nine children born to Adolf and Mary Peddy. At age 5 the family moved to the Peoria area in Alberta and Dorothy attended Mercy School along with her siblings.

In 1950 the family moved to Woking, Alberta.  Dorothy finished grade 9 and then went to work at the hospital at Spirit River as a nurse’s aide.  A few years later she became a cook on the train making meals for the extra gang. This was a crew that worked repairing railroad lines.  It was in Woking that she met Nick Maciak. Nick and his brother John owned and operated the Woking Hotel.  Dorothy and Nick were married in Spirit River on April 15, 1958.  She soon took over cooking the meals in the café and cleaning the rooms.  On January 10, 1959, they welcomed their first daughter Lora, and 18 months later, on August 22, 1960 a set of twins, Ann and Allan. Dorothy was certainly busy! In 1962, the family moved to Edmonton where Dorothy worked at the Tastee Freeze and then in a few different bakeries.

In 1972 the family moved again to Kelowna where she went back to work as a nurse’s aide at Kelowna General Hospital and years later as an activity aide at Cottonwoods Extended Care.

Dorothy took early retirement in 1995.  Sadly Nick passed away in 2000 after 42 years of marriage.  In 2005 Dorothy moved in with her daughter Lora and son-in-law Joe.  As her eyesight started to deteriorate, she was finding it difficult to cook and clean for herself and decided to move into the Okanagan Chateau in 2015 where she lived until her passing.

Rest in peace until we meet again.

A celebration of Dorothy’s life will be held Wednesday, May 11, 2022, at 10:00 am (PDT) at Springfield Funeral Home, 2020 Springfield Road, Kelowna, BC. If you are unable to attend in person, please join the family online by Livestream at the time of the service (see below), a recording will be made available to view shortly thereafter.

The family requests that memorial donations be made to the BC Cancer Clinic in Kelowna.


The service for MACIAK (née PEDDY), Dorothy Ann is scheduled for Wednesday, May 11, 2022, at 10:00 am. Below you will find the map for the service location and the contact information should you have any questions.