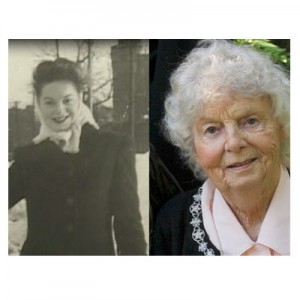 On Sunday, December 18th, 2011 a beautiful, generous spirit left this earth. Thelma Marguerite MAIDEN (Campbell) (nee Hunter) passed away peacefully surrounded by her loving family. She leaves behind 6 surviving children; Doug (Donna) Campbell, Linda (James) Falkener, Janice McKai, Trevor (Chris) Maiden, Karen (Mike) Allan and Janet (Duane) Holder. She was predeceased by her 2 husbands Harry and Fred and her 2 children, Derek and Brock. Thelma was born May 20, 1923 in Shoal Lake, Manitoba to Sarah Spence McKay and William McKinley Hunter. She had an older brother Ian who died in the Second World War and a younger sister Phyllis who passed away in 2010. Thelma grew up in Calgary where she met Harry Cameron Campbell who decided on first sight that she was going to be his wife. They married and moved to Ottawa where they lived till the end of the war. They returned to Calgary where their first son, Derek was born. His life was to last only a few months. Two years later their son Douglas was born, then two years after that, Janice Lee and 5 years later Karen Gail. In 1965 Harry died of a heart attack shortly after his return from serving in the United Nations Peace Keeping Initiative in Egypt. Mom became a single working mother at a time when few women worked. Four years later she met Fred Maiden, who was also widowed and had 4 children of his own; Linda, Trevor, Brock and Janet. On April 2nd, 1969 they married in Banff. The children ranged in age from 9 to 20 and their antics were a constant source of entertainment to their neighbors-a very Un-Brady Bunch indeed. They moved to Kelowna and built a spectacular home, creating a gorgeous garden and a warm, inviting sanctuary. They lived in Lakeview Heights until Fred’s health began to decline and eventually they moved to Hawthorne Park. Brock was their devoted care-giver, getting them out of whatever mischief they got into and indulging them faithfully until he succumbed to cancer in March of this year. Fred also passed away this year on November 4th after a long battle with PSP. Mom loved to entertain their many friends, playing cards late into the night. She enjoyed being around people who were young in spirit and preferred to spend her time joking with the wonderful staff at Orchard Manor and Hawthorne Park rather than hanging around with “old people” (anyone a day older than her). Mom, we will miss the taste of your lemon meringue pie, the crust always perfect because of your light touch – the same light touch we felt when you ran your fingers through our hair or rubbed our backs at tuck-in time. Your voice was soft and gentle – singing Que Sera Sera while you puttered in your kitchen. And you loved to dance – you were born of the generation that dressed to the nines in gowns and gloves. As small children we were mesmerized and enthralled by your elegance and were entranced by the smell of Chanel No. 5 that wafted off you as you kissed us good night. As “Little Grandma” neared the end of her life her joy was found through her babies; her own children, her 14 grand-children and 15 great-grandchildren with a new baby due next spring. And in the spring on May 20th, when the roses are blooming, we will hold a celebration of her life in Vancouver. Mom, we don’t want to say to you “rest in peace” because you were too lively for that. Rather, put on your dancing shoes and glide across Moon River, wider than a mile, crossing it in style.