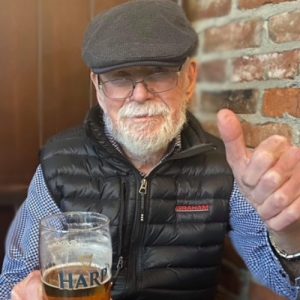 Surrounded by the love of his family, Rick passed away January 27, 2021 in Kelowna, BC in his 89th year. “The five” take consolation in knowing that he is reunited with the love of his life, Barbara, his beautiful wife of 63 years. The loss of our father, our patriarch, will be forever mourned by David (Patricia), Beth (Ron Jean), Carrie, John (Geno) and Paul (Adrienne). He dearly loved his grandchildren Jason, Jeremy, Richard, Peter, Krystina, Korey, Brandon, Kyle, Andrew, Matthew, Shauna, Kaleb, and Lupita. He was a proud Pops to Angela, Chloe, Ethan, Olivia, Grayson, Madeline, Everett, Adeline and Isabella. Dearest brother to Ivy Boal and brother-in-law to Jean Mailey, he had a special place in his heart for his daughter-in-law Laurie Schutte and all his nieces and nephews. He will be missed by his lifelong friends Billy Barron and Gord Cassidy. Rick was predeceased by his wife Barbara (2020); his parents Ivy and Thomas; his brother Edward; and his in-laws Harry Boal, Robert and Rita Pattle, and Corinne Dobson.

Rick grew up in Bangor, Northern Ireland and returned to his birthplace Windsor, Ontario in 1952. There he met and married Barb, and they settled in Sarnia, ON to raise their family.  Rick became a principle in RW McKay Construction, a local general contracting firm, and over the years built many of the important landmark buildings including Sarnia City Hall, the Public Library, Alexander McKenzie High School and the Germain and Clearwater Arenas to name a few.

Dad and Mom moved to Kelowna in 1999, and they split their time between there and Carefree, Arizona.  He was a man of integrity and honour who always put his family first. He was blessed with great patience and always available to lend a helping hand along with words of advice and encouragement. He was a craftsman and an artist, he had a great sense of humour and loved a joke, a song and a Guinness. To the five of us he was everything. We love you Dad, always have, always will.