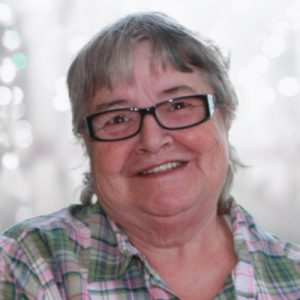 Iris Manly passed away on September 8, 2021 in Kelowna, BC. Born in Winnipeg, MB along with her siblings Norma and Harold, Iris was the eldest child of Clifford Malcolm Manly and Evelyn Flora Biladeau. Strong-willed and fiercely independent, Iris met life’s challenges, to her benefit or detriment, on her own terms.

In 1964, still in Winnipeg, Iris married Mark Ward and had a daughter, Donna. Shortly after, they moved to the lower mainland of British Columbia where their second daughter, Sharon, was born. This marriage however didn’t last.

As a single mother of two daughters, she met Guy Yee with his son Gord and daughter Cindy in the 70s. They formed a “Brady Bunch” household for a short while and had a son, Jason. This union wouldn’t last either. In those times Iris developed her lifelong love of gardening, camping and fishing. She also bowled in a league and played women’s hockey.

In the 80s, Iris drove a catering truck and even worked on a fishing boat. At this time she would lose first her mother, then her father. She moved to Kelowna and welcomed her first grandchild, Sharon’s son Jeremy Ward; followed not long after by a second grandchild, Donna’s daughter Lisa Jensen.

The 90s brought a third grandchild, Donna’s son Daniel Jensen. Iris would meet a steadfast companion in Cal. They would live in Logan Lake, BC for a time, but eventually they returned to Kelowna. Despite the challenges of Iris, Cal would remain her friend and as much of a companion as Iris would allow. In 1997 Iris’s daughter Sharon would disappear, and has not been seen or heard from to date. Iris never accepted the presumed conclusion and believed Sharon was off living her own life somewhere.

In the 2010s, Iris would be there to welcome her fourth and fifth grandchildren, Jason’s son Tyson Yee and daughter Jasmine Yee. Iris would write every day, even if it was just to note the weather. She also enjoyed painting and drawing.

In 2021, her health in decline, Iris went to the Central Okanagan Hospice House where, with paint on her fingers, she passed on to see if the afterlife would accept her terms.