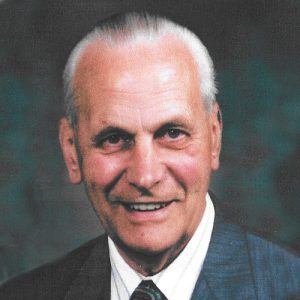 In loving memory of Ruben (Rubin) Alfred Mantler who passed away peacefully in Kelowna, BC on April 4, 2021. Ruben was born in Mennon, Saskatchewan on June 21, 1930, to Peter S. Mantler and Sara Friesen. His family moved to British Columbia in 1935, finally settling on a farm in Clearbrook. Ruben graduated from Philip Sheffield High School in 1948 and was baptized in the Clearbrook Mennonite Brethren Church in 1949. He opened his first autobody shop in the early 1950s but closed it shortly after when he moved to Terrace, BC. He fell in love with the city and the people following a spontaneous vacation to the area. Love was definitely in the air in Terrace! In 1956, Ruben met Ellen who was the love of his life and his partner and helpmate from 1957 until his last breath. They started their family in Terrace with Philip James, born in 1960, and Elaine Marlene, born in 1961. They moved to Prince George in 1961 where Ruben opened his next autobody shop and continued his work as a master automotive painter. Janet Lois was born in 1964. Ruben spent his days working in the shop and soon spent his evenings studying to become a Certified General Accountant. Ruben opened his own accounting practice in 1975, and although he sold his practice in 2007 when he and Ellen moved to Kelowna, he didn’t officially retire from accounting until 2020.

Throughout his life, Ruben was a quiet but very active member of the Mennonite Brethren church, consistently tithing even when financial times were tight. He lived a life of service behind the scenes. He was the church treasurer and a member of many volunteer boards in Prince George and Kelowna. He was always present at church work bees and lent a helping hand to those in need. He was giving and selfless and saw the best in people. Ruben was a man of honesty and integrity. He was trustworthy even when it wasn’t convenient. Every action he took, he did it to the absolute best of his ability. After surviving rheumatic fever when he was eight, Ruben was told that he would have to be careful with what he did because he now had a bad heart. When his heart finally stopped beating in the wee hours of the morning on April 4, we knew those doctors in 1938 were wrong. Ruben had a very good heart indeed.

In lieu of flowers, please give a bouquet of daffodils or tulips to someone who needs a bright light in their day or make a donation to the Mennonite Central Committee.

A Service will be held with immediate family members in attendance. Livestreaming will be available for family and friends at a distance on APRIL 6, 2021, AT 3:00 PM (See Below). A recording will be made available to view shortly thereafter.