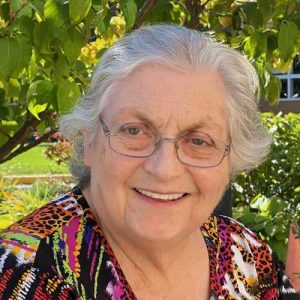 On September 28, 2021 Carol Ann Manzuik (Gulayeff) passed away peacefully at SunPointe Village in Kelowna, BC. She will be dearly missed by her husband of 51 years, Steve; her three children Sue, Scott (Chantelle) and Steve (Jamie); seven grandchildren (Ronin, Peyton, Alex, Connor, Greyson, Hope, and Jack); and extended family including her sister Lisa and her niece Linda.

Carol was born on February 2, 1948 in Kamsack, Saskatchewan. She grew up on a farm surrounded by immediate and extended family. They worked the land together while also raising cows and turkeys. Carol and her sister Lisa would often be found eating chokecherries in the pasture until their teeth were black, or making a batch of fudge on a Friday night. It was these early experiences that instilled a love of home-cooked meals and time spent with family. No one could make borscht or dumpling soup like her. Her grandchildren were everything to her. They brought her so much joy and many, many memories that her family will cherish. Countless family hours were spent collecting rocks, picking wildflowers, baking and cuddling grandbabies to sleep on her chest.

Carol was a retired Registered Nurse who completed her training at Calgary General Hospital in 1970. In addition to Calgary General, she worked at Vernon and Kelowna General Hospitals, and spent the latter years of her career working at Cottonwoods in Kelowna, BC. She had an incomparable work ethic, loved being a nurse, and was a strong advocate for residents and their families. Late in her career, she completed her master’s degree in counseling in order to support her patients and their families even further. She had the biggest heart and a smile that brought warmth and comfort even in the most difficult of circumstances. She touched so many lives with her kind and loving nature.

A private family gathering will be held. In lieu of flowers, donations may be made in Carol’s name to the Alzheimer’s Society of BC.