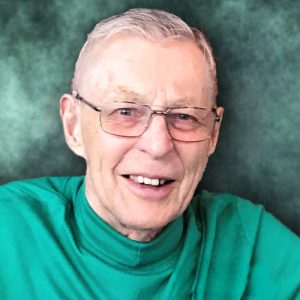 Born in Edmonton, AB, Milt Matthews passed away on January 5, 2023, in Kelowna, BC at the age of 94.  He is survived by his loving family: his wife of 61 years, Nancy (née Hood); son Paul (Trish) and granddaughters Nicole and Neeva; son Vance and grandsons Garret and Spencer; and son Scott.

After graduating in 1952 from the Chemical Engineering program at the University of Alberta, he had a rewarding career as a professional engineer, first working for the ERCB and then later for Mobil Oil Canada in Calgary until his retirement.

While in Edmonton, he met and married his love, Nancy Hood, on October 7, 1961.  Together they raised their three sons.  Milt was dedicated to his family, church, and community, devoting much of his time to coaching community sports and golfing with his sons.  During his retirement, Milt spent a great deal of time volunteering at non-profits, especially the Calgary Food Bank.  Milt and Nancy were active members at St. James Parish in Calgary and spent time travelling to Europe, Israel, Egypt, and the USA.

Milton will be sadly missed each and every day, remembered, and safely kept within our hearts where he will always stay.