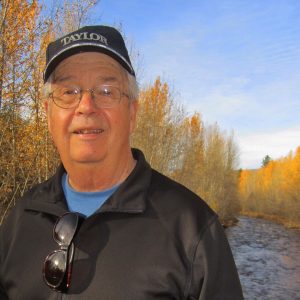 “I am a little pencil in the hand of a writing God who is sending a love letter to the world.”

Dr Ronald Mayforth went home to be with the Lord on December 28, 2019. He is survived by his loving wife of 60 years, Sharon and their 3 children: Pamela (Dale) Hanson; Polly (Myron) Krause; and Perry (Michelle) Mayforth; as well as his 9 grandchildren; his 1 and ¾ great grandchildren; and his 3 brothers.

Ronald Eric Mayforth was born on July 18, 1938 in Chicago, Illinois, USA, to Charles and Gertrude Mayforth. Charlie and Gertie raised their four boys, Richard “Dick”, Ronald “Ron”, Robert “Bob”, and Russell “Pete” in the Benton Harbor/St. Joseph, Michigan area. They attended the First Baptist Church in St. Joseph where Ronnie made a decision to follow Jesus at the age of 12. His pastor, Reverend Broker, recognized his gifts and encouraged him to go into ministry.

After High School, Ron enrolled at Fort Wayne Bible College and met the sweet, petite, love of his life, Sharon Anne Yntema. They were married September 12, 1959, in Detroit, as they entered their last year of Bible College. He graduated with a Bachelor of Arts degree in Social Studies.

1963 was a big year for Ron, as he graduated from the Sioux Falls Seminary at the top of his class with a Master of Divinity Degree and was ordained to the gospel ministry with his brother, Richard, in a double ceremony at their home church. He and Sharon also welcomed their first born, Pamela Sue. Polly Anne would come along in Madison, South Dakota in 1966. Perry Alan would round out the family in 1968 in Calgary, Alberta, Canada. Ron would go on to graduate from the North American Baptist Seminary with his Doctor of Ministry degree in 1983.

Together, Ron and Sharon faithfully served churches in Indiana, South Dakota, Michigan, Alberta, and British Columbia. They were dynamite as a team. Ron also had other opportunities to use his varied gifts. He served as a District Area Minister for the Dakotas, Montana, and Minnesota for two years and at the North American Baptist Headquarters in Chicago as the Director of Area Ministers for four years. He spent almost 11 years at the Edmonton Baptist Seminary where he excelled and thrived as the Professor of Pastoral Theology. He spent his last 11 years before retirement, working part-time for the NAB Conference as the Liaison for Retired Servants (Pastors, Missionaries, Professors, and Chaplains). He had good opportunities; he gave himself to God, the people, and his work and was rewarded with a rich vocational life.

Ron and Sharon lived in 16 different places and had the privilege of travelling to Israel, Egypt, Greece, Turkey, England, Scotland, Wales, The Bahamas, Mexico, Germany, Austria, Belgium, Holland, Yugoslavia and most of the US and Canada.

This past year, Ron and Sharon celebrated sixty years of married life. What an accomplishment in this day and age! They’re blessed with 9 grandchildren, one great grandchild and one on the way!

He was a devoted follower of Jesus, a loving son, brother, husband, father, and friend, a diligent scholar, a passionate, creative preacher, a faithful shepherd, a lively storyteller, a witty, funny man, and a cheerful, generous giver who strived to live out the Kingdom of God here on earth. He’s touched many lives and will be missed. We thank God for Ronald Eric Mayforth.

THIS SERVICE WILL BE LIVE STREAMED SATURDAY, JANUARY 18 AT 1:00PM


The service for MAYFORTH, Ronald is scheduled for Saturday, January 18, 2020 at 1:00 pm. Below you will find the map for the service location and the contact information should you have any questions.