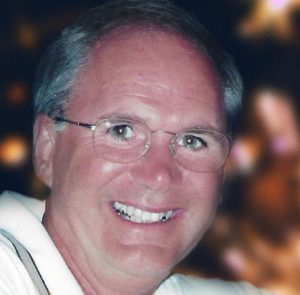 Time to say goodbye to our beloved John.

After a long struggle with Alzheimer’s disease, John passed away with family by his side, on the evening of Saturday, April 23rd in Kelowna, BC. Survived by his loving wife of 56 years, Wendy; brothers Bruce (Jo), and Scott (Liz); sister Margie (Marty); children Rob (Paige), Marnie (Clayton), and Kelly (Brent); daughter-in-law Nathalia; and grandchildren Jocelyn, Megan, Connor, Chase, Addison, Raielle and Emily. John is predeceased by his parents Mary and Ivan McComb; his son Michael; and his brother Brent.

John was born and raised in Vancouver, BC. He loved to describe himself as a “Kits Kid”, growing up in the idyllic neighborhood of Kitsilano.  He was active in the Scouting movement for many years, working hard to earn the distinction of Queen Scout, the top scouting award, and eventually sharing this love with his sons. As a Rover Scout, John discovered a passion for sailing and went on to build his own sailboat, with which he enjoyed many afternoons sailing on Lake Okanagan.

John graduated from UBC in 1964 with a Bachelor of Science in Forestry. Soon after, he was hired by Crown Zellerback (now Tolko) and went on to enjoy a successful 42-year career with the company. He was well-loved by his coworkers and proved to be a born salesman, rising through the ranks to become the company’s Plywood Sales Manager, overseeing sales around the globe. He and his family moved many times for work, crisscrossing the country – Vancouver, Toronto, Vancouver, Montreal, Coquitlam, and finally to Kelowna. Throughout his career, he traveled extensively through Europe, the US, Asia, and frequently to Japan. He loved the Japanese way of life and especially the art of Bonsai, which he pursued vigorously.

John and Wendy met at UBC and married in 1966. They enjoyed a loving, active, and fulfilling life together while raising their family. Hiking, skiing, sailing, and gardening kept him busy. Camping holidays with family and friends was an adventure he particularly loved. After retiring, John and Wendy enjoyed many trips together to Mexico, the Caribbean, Australia, and Europe.

Being equal parts kind and full of mischief, John was loved by all who knew him. Now it is time to say goodbye and rest in peace, dear John. You will live on in our hearts forever.

In lieu of flowers, donations to the Alzheimer Society of Canada would be appreciated.