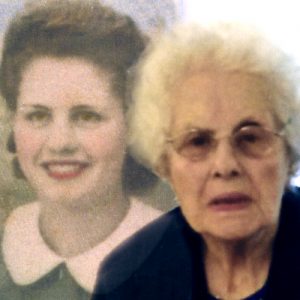 It is with great sadness we announce the passing of our mom, Ivy Angela McKay, on January 17, 2022. Mom had reached the age of 99 years.

Ivy was predeceased by her first husband, Melvyn Rafter, and her second husband, Robert McKay; her brother, Robert; and her sister-in-law, Nancy, in England.

Mom was born on November 16, 1922 in London, England. She had a very adventurous life. During WW II in London, she worked on the construction of the Spitfire, which flew in the Battle of Britain. She married Dad in 1942 and after the war ended, she emigrated to Canada as a War Bride. They lived in Nova Scotia, Germany, and Manitoba on the RCAF Air Bases.

Mom was a skilled seamstress and worked for the Provincial Government in Portage la Prairie, Manitoba until her retirement. She made many cute outfits for her grandchildren. She was also a skilled knitter and thoroughly enjoyed her craft. She always had a good sense of humour and a smile.

In 1992 Mom moved to Kelowna, BC to be near her daughter. Mom’s final years were spent at the Village at Mill Creek in Kelowna. We thank the caregivers and nurses for their compassion, care, and support. Thank you to Dr. Luigi Pavan for his excellent care of Mom.

A family memorial service will be held at a later date.