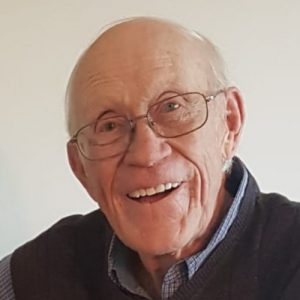 It is with heavy hearts the family of Gordon Warner McMillan announce that with family by his side, he slipped peacefully away on May 18, 2021 at the age of 94. Beloved husband, dad, Gramps, and Great-Grampa.

Gord was born in Moose Jaw, SK on January 4, 1927. He attended the University of Michigan where he completed his Master’s degree in Geology and played for the Michigan Wolverines Hockey team. Gordon was ranked #6 in “Michigan Hockey’s best 50 players of all time” and led the team in scoring all four years at Michigan. Gord scored two goals in the 1948 NCAA championship game, helping them to win the first national championship in program history, and is 10th in career points in program history. He was inducted into the Michigan Hall of Honor and was player of the decade for the 1940s. Gord was very proud of Michigan and his hockey accomplishments.  He adored his grandchildren and taught them all to skate, often giving them his best hockey advice … “Keep your elbows up” with his in the air and a little smirk on his face.

After graduation, Gord moved to Calgary, AB and started working at Shell Oil where he met Doe. They married in 1952 and were married 66 years.  Gord went on to work for Cardo Canada for a number of years until he started his own company, “McMillan Oils.”   He and his son Brian worked for several years together. Gord was a very successful geologist and was responsible for significant oil and gas discoveries in both Alberta and BC.

Gord and Doe lived in Calgary until 8 years ago when they moved to their Kelowna, BC lake house they bought as a summer vacation home in 1967. There they spent every summer with Bruce, Brian and Donna Lee. Summers were always filled with friends and family visiting making wonderful memories. Gord enjoyed snow skiing, hunting, water skiing, golfing, and fishing.

He was an amazing man who was incredibly generous to his family and friends and was always helping someone out one way or another. Gord loved his Michigan gang, his golf buddies, hunting buddies, neighbors and many friends. He had many lifelong friends with special mention to “the kids” Dale and Dianne Wilson.

The family would like to thank all of Dad’s many friends and family for their love and support, the staff at Brandts Creek Mews, especially the nursing staff and care aids in Pear Lane, and Dr. Jennifer Parsons for providing such loving care to dad.

A special gathering will be held at a later date to celebrate his life. Condolences may be sent to the family by visiting www.springfieldfuneralhome.com