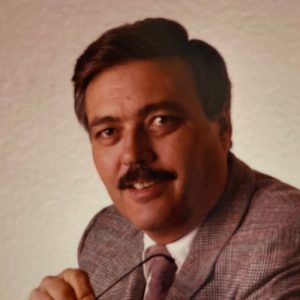 John retired after 36 fun years with John Deere Limited, starting in 1956 straight out of high school as the Mail Boy at the Parts Distribution Centre in Regina, SK and working his way up through the ranks. In 1970, John was transferred to John Deere Welland Works in Welland, ON to “clean up the Parts Department” which he capably did!  In 1987, John was transferred back to Regina as Depot Manager of the Parts Distribution Centre for Western Canada and retired in 1992. When asked what he did for a living, John’s humble response was “whatever I was asked to do”, and basically that sums it up. John’s goal in life was always to make it a better place, which he, also, capably did.

John loved telling stories of his years with John Deere, his adventures on the road and the people he met along the way.

In 2004, John and Mary set out on a new venture, ending up in West Kelowna, BC, leaving behind many great friends in the Niagara Region. Funny though, many of our friends found us in the Okanagan Valley and understood why we chose West Kelowna as our next home.

John was always up-to-date on the latest sports, news and political information, and his daily online newspapers and the six o’clock news was a must. He loved to sit and discuss these topics with anyone who would engage, and always had sound advice to offer those who sought it.

A Saskatchewan Roughrider fan through and through, sneaking under fences to see the game! His grandma bought his first seasons ticket for $7 in the standing gallery! In Puerto Vallarta, he was always right there for the Roughrider Nation Rallies, front and centre!  Go Riders!!!

John and Mary enjoyed 13 fun-filled winters in Siesta Key and Key West, FL where they acquired many lifelong friendships. After moving to the Okanagan they ventured to Cabo San Lucas and Puerto Vallarta, MX making many new lasting friendships in Mexico and from all over North America, another great 12 years!

Following cremation, John will be at rest with his mom and grandma at the Regina Memorial Gardens. Respecting the restrictions of COVID-19, a Celebration of Life will not be held at this time.

In lieu of flowers, donations to the Heart and Stroke Foundation, www.heartandstroke.ca, Canadian Cancer Society, www.cancer.ca, or a charity of your choice would be appreciated.