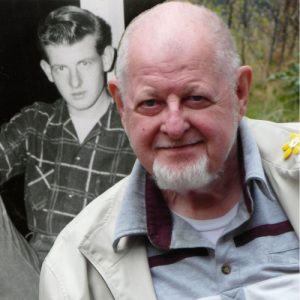 Johnny Metcalf passed away peacefully at home, with his wife of 62 years by his side, on September 29, 2021. He is survived by his sister Sandra Henriksen of Kingston, ON; his three sons Stacy (Lori) of Kelowna, BC, Glen of Calgary, AB, and Carey (Sharon) of Calgary, AB; five grandchildren Sara (Keith), Megan (Jordan), Melissa (Rodrigo), Kelsey (Dave), and Mark; eight great-grandchildren Abbey, Conner, Breyden, Olivia, Noe, Johanna, Marek, and Dusten. He was predeceased by his parents William H. and Maureen A. (née Miller) and his brother Clifford.

John, born in Nelson, BC, grew up in smaller towns of British Columbia. He even spent a couple of years in Barkerville before it was preserved as a heritage town. One of his earliest jobs was underground in the mines of Elliot Lake, Ontario. This is where, in 1959, he met his wife of 62 years, Helga. As she disapproved of his job’s risk to life, they moved to greater Vancouver, BC where he worked on early, room sized, punch-tape computers. They had three sons here and built their first home (1963) near the Pattullo Bridge. Working as a Mechanical Cash-register & Typewriter Repairman, he was transferred to Belleville, ON, then again Brockville, ON. Rather than a third transfer, John and Helga brought the family back to British Columbia in 1972; they tried out Kelowna and Penticton before settling on his father’s old stomping grounds of the Shuswap area. He was employed by the school district to repair audio & video equipment. They rented a few years as they developed an acre and built their homestead of 35 years on Gardom Lake. In 1984, at the infancy of home & small business computing, John opened his own storefront in Salmon Arm, “Shuswap Micro-tech”.

John had set out on his own at an early age with a grade 8 education; but, he was always keen to learn. He read most of his Encyclopedia Britannica and had subscriptions to National Geographic and Scientific America. He was keenly interested in history, geology, astrophysics and the space program. He “wanted to be an astronaut” before the term was even coined.

John had a “do-it-yourself” philosophy, any renovations or repairs to be done to home, appliance, or auto were always attacked wholeheartedly and without hesitation. Yet, he always found time for the family to do road trips and camping/exploring. He also found time to amass quite the collection of sci-fi novels and delve into the arts. He did a few oil paintings, a three-dimensional moonscape, stamp collecting, wine making, and was a model railroader. John enjoyed his photography and music collection, and liked it all organized and documented. The early home computers were good for that. With improved computing and the internet, John spent a decade amassing quite the genealogy database.

In 2012, John and Helga moved to a condo on Kelowna’s Sutherland Street. There he found engaging conversations and interactions with the strata council, social gatherings, and coffee groups. His insight (injected with wit and humor) shall be missed by his family and many friends.

In lieu of flowers, memorial donations may be made to the BC Cancer Agency – Sindi Ahluwalia Hawkins Centre for the Southern Interior.