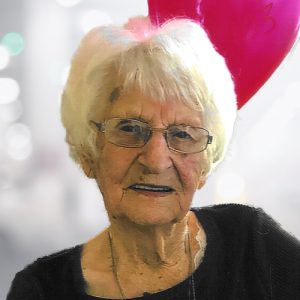 Born in 1917, Margarethe passed away peacefully on May 26, 2021, at the age of 103.  During the Great Depression in 1936, She married the love of her life Bill Meyer. They were grain & dairy farmers around Rush Lake, SK until they retired. In 1974, they moved to Switf Current, SK and then relocated to Kelowna, BC in 1986. After Bill died, Margarethe lived independently until her passing.

Margarethe was predeceased by her husband Bill (d. 1993); her son Ken (d. 2021); parents Peter & Lydia Reimer; and siblings  Art (Gladys), Alfred (Phyllis), Laura (Clarence), Arnold (Judy), and Eldon. She is survived by her sister-in-law Betty Boetiger (formerly known as Reimer); her daughter-in-law Verna Meyer; and her numerous nieces and nephews.

When Queen Elizabeth came through Saskatchewan on the train in the 1950s Margarethe was there to see her; she loved watching the Royal Family grow through the years.

Margarethe was a true farmer’s wife, but in her spare time she enjoyed sewing, quilting, gardening, and needlework. She quilted until she was 95 and was still mending clothes this year. She always said that she rather work outdoors than indoors.

A strong member of the Lutheran Church, Margarethe sang in the choir and travelled to a few church conventions in her younger years.

A Funeral Service will be held with Reverend Brian Krushel Officiating with interment at Kelowna Memorial Park Cemetery to follow. However, due to the current pandemic restrictions, in-person will be by invitation only. The family would like to invite all who want to pay their respects to join online by Livestream on FRIDAY, JUNE 4, 2021, at 1:00 PM PST (see below). A recording will be made available to view shortly thereafter.