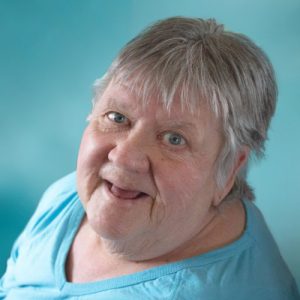 Jeanette, the eldest child of Michael & Jennie Ochotta, was born in small town Boyle, Alberta and grew up on the family honey farm. As a teen, she went to live in Edmonton, Alberta with her Uncle Nick Ochotta and his wife, Irene, to attend school. In 1961, she met the love of her life, William “Bill” Meyn, and they were married June 8, 1963. After moving to Vancouver, they had 2 daughters, Kathleen & Tamara.

For most of her career, she worked as an Inside Sales Representative in the floor covering industry. She enjoyed many hobbies including bowling, cooking, and gardening. She was a member of The Vancouver Ukrainian Choir and often volunteered in the kitchen.

In 2001, Jeanette & Bill moved to Kelowna, BC to care for Jeanette’s parents and then chose to make Kelowna their home. Although retired, Jeanette returned to the workforce, enjoying several years in retail at The Bargain Shop. She volunteered at Share Society and The Battered Women’s Shelter second hand stores. She also volunteered for Mother’s March of Dimes and with the Red Cross Evacuation Centre during the 2003 Kelowna fires.

Jeanette was an amazing mother and wife! She was thrilled to become a grandmother & great-grandmother, guiding her entire family with integrity and an abundance of love.
She was predeceased by her husband Bill; her son Blaine; her father Michael Ochotta; her mother Jeannie Ochotta (née Standyk); and her younger brother Dwight Ochotta.
She will be lovingly remembered and deeply missed by daughters & sons-in-law: Kathleen Meyn (Tim Taylor) of Kelowna, BC & Tamara Lamphier (Stephen Lamphier) of Tonasket, Washington; her 4 beautiful grandchildren Jessica Meyn, Brittney Meyn, Nicole Wuest, and Joshua Wuest; along with her 4 great-grandchildren Katelynn, Mason, Brooklynn and Addilynn Saunders.

Jeanette declined a formal funeral and instead was honoured by her Tao Family at the Salmon Arm Holy House.