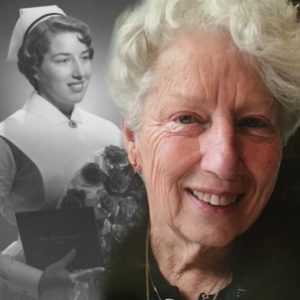 Mary passed away peacefully on October 10th at Kelowna Hospice House six months after being diagnosed with pancreatic cancer.

Mary is survived by Dean her husband of 62 years; their three children Kathy (Jeff) Hattrick, Bruce (Tracy), Brian (Monique); and four grandchildren Kurtis and Jayme Miller, and Jason and Laura Hattrick.  All children and grandchildren reside in the Kelowna area.  She is also survived by her brother Bob (Baiba) Gowen of McMinnville, Oregon.

The daughter of Charles and Rose Gowen, Mary was a proud native of Kelowna, BC. She grew up with her brother in what was more commonly known as the Five Bridges area (Sutherland Avenue & Burtch Road). Some may remember Charlie’s auto garage and the family auto court (motel) located on their property. Her family chores around the home and auto court helped hone her sense of duty that was evident in later years.

Upon graduation from Kelowna High School in 1953, Mary left Kelowna to train as a nurse at Royal Columbia Hospital in New Westminster, BC. Upon graduating as an RN, Mary returned to Kelowna to marry her high school sweetheart, Dean, and immediately started their family in Kelowna.  Mary was born a caregiver and took great pride in her nursing skills. Whether on the job at Kelowna General Hospital or helping friends and family you could always count on her being by your side.

Mary was known for her energy and passion – she loved skiing with her family at Big White and was an eager volunteer at her and Dean’s church. Mary volunteered at and was a big promoter of their church’s MCC Thrift Store in Rutland.  Mary helped organize countless KSS high school reunions and spent much of her time staying connected with friends she had known from early elementary school years.

Mary touched the lives of many and all of them would describe her as kind, honest, loyal and caring.  She loved being a mother and Nana.  Mary will be deeply missed by family and her many friends, but we know she is happy to be reunited with her parents.

Our thanks to Dr. Peter Butterworth as well as the staff at Kelowna Hospice House for the care and compassion provided to Mary.

A service will be held at a later date, in the meantime please say a prayer for Mary and her family. Flowers are respectfully declined.