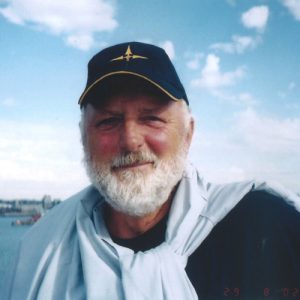 In appreciation for a long life, well-lived, we announce John’s passing on June 1, 2021, at the age of 88, with family at his side.

John was born in Montreal, Quebec, but grew up in Hemmingford on the family farm. He spent his teenage years in Pointe-Claire.

John was a high-energy guy. As a young man, he loved to sail, and it was something that he did well, as he brought home many awards. Through the years, John built many boats for sailing and fishing. He loved to be on the water.

Even more special to him than his boats, was the love of his life, Elizabeth Cross. She crewed for him on one of his sailboats, he was the first one to call her Liz, and that was the beginning of a 66-year marriage. Four children came along, and the whole family became part of the activities – skiing summer and winter, swimming, boating, fishing, rock-hunting, and camping. When grandkids started to arrive, they were part of the adventures too.

Through the years, John enjoyed his hobbies: silversmithing, lapidary, and creating jewellry. He especially loved to work in his wood shop. After years of building boats, he turned to making furniture and children’s toys such as ride-on trucks, diggers, and boats. Family and friends all have treasured pieces of his work – furniture built to last. His more recent projects were wooden spatulas and tongs, especially useful, small items that he gave away to many delighted recipients.

He will be forever remembered by his wife, Liz, his four children: Deborah Wilson (Lane), John Monk (Cindy), Dave Monk (Cyndy), and Brenda Yasinski; 10 grandchildren; 13 great-grandchildren with another soon to arrive. Quite a legacy! He is survived by his brother Dave (Sharon) and sister-in-law Virginia. He was predeceased by his brother Ron.

The family would like to thank all the staff at Kelowna General Hospital for their gentle, compassionate care.

In lieu of flowers, donations may be made to the Central Okanagan Community Food Bank or the BC Children’s Hospital Foundation.

Due to Covid-19 restrictions, a gathering will be planned for a later time.