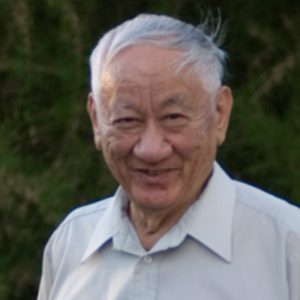 Minoru (“Min”) Mori of Kelowna, BC died on May 20, 2022, at age 94. He was predeceased by his wife Midori; brothers Hikaru (Chic), Teruo (Ted) and Akira (Shorty); sisters Mieko (Ken) and Emiko (Carl); Midori’s sister Michiko (Urts). and grandson Dexter. Min is mourned by his children Elaine Mori (Brian) and Julie Mori, of Kelowna, Glenn Mori (Isabella), of Vancouver, BC, and Kevin Mori (Diane), of Chandler, Arizona; his grandchildren Tova, Kayla, Tiana, Krista, Janelle, and Scott; his brother Sat (Yemiko) of Kelowna;  and many nieces and nephews.

Min was born and raised in Kelowna. He worked with wood all his life, at various lumber companies in Kamloops, Salmon Arm and Revelstoke, ending up back in Kelowna.  He started at S&K Plywood in 1961 and remained there despite many ownership changes; retiring from Fletcher Challenge in 1986.  He married Midori in 1959 and, along with help from friends and family, built their family house in 1961-1962 on the Mori family orchard and greenhouse property at Ethel and Guisachan. They remained in that house until 2015.

He had a lifelong passion for woodworking of all kinds, creating anything from delicate turned-wood wedding gifts to furniture that he followed well into his 80s. He was particularly dedicated to the Kelowna Buddhist Temple, serving on the executive board for many years.  His value to the Temple was demonstrated by a long list of accomplishments there, from constructing cabinetry and shelving, to modifying kitchen implements to make their chow mein events go smoother, to decades of snow removal, participating in fundraising events, hosting students from Japan, and helping to organize numerous events. A particularly meaningful contribution was his involvement with the Sunday School, where he helped students with projects such as making small shrines (“obutsudan”), holders for prayer beads (“ojuzu”), and his famous bird houses. In his later years, he enjoyed going to the casino with Midori, claiming that he only went because she liked it so much!

The family wishes to thank the staff on 4A at Kelowna General Hospital; Drs Mohr and Wilson; and his family doctor, Dr Alexis Thomson, for the care and attention provided to Min during his last days.

A Funeral is scheduled for SAURDAY, JUNE 11, 2022, at 10:00 AM, at KELOWNA BUDDHIST TEMPLE, 1089 Borden Avenue, Kelowna, BC, with a reception to follow. Rev. Naoki Hirano will officiate the ceremony. All are welcome to attend the funeral.

If you are unable to attend in person, please join the family online by Livestream at the time of the service (see below), a recording will be made available to view shortly thereafter.

In lieu of flowers and koden, donations to the Kelowna Buddhist Temple  would be appreciated.


The service for MORI, Minoru is scheduled for SAURDAY, JUNE 11, 2022, at 10:00 AM. Below you will find the map for the service location and the contact information should you have any questions.