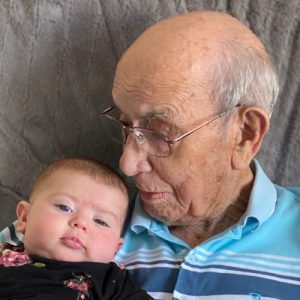 Reginald Murray passed away peacefully on December 10, 2020, at the age of 93 at the Kelowna General Hospital. Reg’s memory will be cherished by his surviving family including his Wife Violet Hubick (Her daughters Val, Cheryl, Heather and son Wayne), his sons William (Lee-Ann), Robert (Colleen), daughter Carolyn and his son Terry (Carrie), his ten Grandchildren Amber, Garry, Denielle, Kody, Cloe, Troy, Grant, Kendra, Katie and Jay; as well his three Great- grandchildren Hayden, Natalie and Emerie along with numerous nieces, nephews and family friends. Predeceased him include his first wife, Enid Murray and his daughter Sandra Murray.

Born in June 1927 in Semans, Saskatchewan. Reg was one of ten children to William and Ida (Knott) Murray. He was active through his life playing Hockey, Curling, Baseball and then eventually coaching and supporting his kids in Hockey, Baseball, Swimming, Bowling and Softball. He met and married Enid in Nokomis, Saskatchewan.  In the fall of 1965 moved his family to Port Coquitlam BC where he lived to his retirement in 1989 and moved to Kelowna, BC after a long career as a carpenter with BC Tel.

In 2010, Reg met and married his second wife, Violet; they spent Reg’s final years cruising the oceans, trips back to Saskatchewan and going on multiple bus trips to various casinos. They were able to watch his beloved Toronto Blue Jays when they took a trip to Seattle Washington.
Reg was, above all, a devoted father, grandfather, great-grandfather and uncle who sacrificed everything for his family.

A Graveside Service will be held on August 7, 2021 at 2:00 pm at the Semans Cemetery in Semans, Saskatchewan and a Celebration of Reg’s Life (TBA).

In lieu of flowers, donations may be made in Reg’s name to the Kelowna General Hospital Foundation, 2266 Pandosy, Kelowna, BC