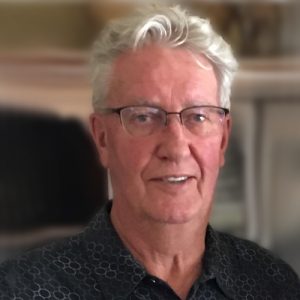 Gerald Joseph Nagel, age 77, of Lake Country, BC passed away October 5, 2021, after a brief but strong-willed fight to overcome a long-term health condition. Gerald was born April 22, 1944, in Moose Jaw, SK to Joseph and Lillian Nagel. Nagel in German means NAIL.

On September 26, 1972, in Moose Jaw, SK, Gerald started working for Graham Construction Ltd. He rose to his calling, quickly becoming Project Superintendent. While in Saskatchewan, his projects were in Yorkton, Regina, Coronach, Key Lake, Saskatoon, North Battleford, and Lloydminster. In 1992, after a move to BC, there were projects in Vernon, Kelowna, Chase, Logan Lake, Sparwood, Vernon and Nanaimo. From 2002 to 2008, Gerald was in Calgary, AB supervising more Graham projects. In 2008, it was back to Kelowna, BC. Gerald’s final project was the Kelowna General Hospital, a 6 floor Acute Care Centre with a Helipad! The General (as he was called on the Kelowna Hospital Project) found pleasure and pride in the wide variety of large projects he oversaw throughout his career. Gerald stayed with Graham for nearly 40 years.

After retiring from a rewarding career with Graham in 2012, it was no surprise that Gerald was not ready for retirement. He soon found himself a partner in Savoy Equipment Ltd. and turned his attention to bettering the company with the many renovations he tackled in the storefronts.

Gerald was also very committed to The Salvation Army. He volunteered at Calgary Glenmore Temple where an existing 3-story church had an elevator installed. In Kelowna, he again volunteered when a bowling alley and pub became The Salvation Army Community Life Centre, Thrift Store and Emergency Response Garage. Through these ventures, Gerald formed many successful relationships and left a lasting impact on everyone he worked for or volunteered with. If you knew Gerald, or even if you had just met him, we are positive his albums of construction sites have graced your eyes as they were sure to be on the table during your visit – or on your table as he also traveled with them! Never to let a hammer rest, he always found something that needed a nail or two at Darren’s or Brenda’s homes when visiting them in Saskatoon, SK.

Gerald is predeceased by his parents, Joseph (d. 1991) and Lillian (d. 2001), his brother Marvin (d. 1977), his sister Mavis and husband, Les, (d. 2005) and his brother-in-law Rudy (d. 2018), as well numerous extended family members. Gerald is survived by his brothers Keith (Ruth) and Dennis, and his sister Iris. Gerald’s memory will be cherished by his loving wife, Imelda; his children Brenda (Amanda) Nagel and Darren (Carrie) Nagel, and grandchildren, Everton and Makar, Lilian and Isla; Imelda’s son, Andrew (Ngozi) Lauman, and grandchildren Michayah, Jadon, Kaleb, Joshua and Zoey; as well as Michayah’s, Jadon’s and Kaleb’s mother Kerry, will also remember him fondly. All of the grandchildren will think of their Grandpa and Papa with affection as the soft-spoken, humorous (yes, Dad-humor can be funny) and the “you build things perfect” man he was.

During these uncertain times, the family has opted to postpone the Celebration of Gerald’s life until the Spring of 2022. A notice will be posted with details for Gerald’s Celebration. In lieu of floral arrangements, the family requests any tribute gifts be made to your local Salvation Army or to the Canadian Lung Association in memory of Gerald.