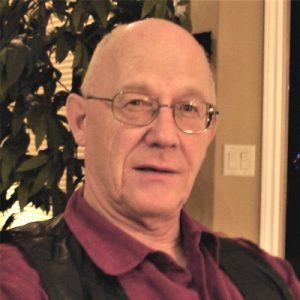 Gary Warren Nuson was born on January 4, 1944 to Wally and Lottie in Kenora, Ontario. He went to be with the Lord on January 7, 2020 at the age of 76 in Hospice House. He was predeceased by our son Michael Leonard at the age of 5 ½ in 1982. Gary is survived by his wife of 50 years, Karen Elizabeth; his adult adopted family: Tammy and Brian Zomar, including grandchildren Rachel, Katelyn and Justin, great grandchildren Landon, Austin and Kayden as well as Kate and Wayne Carter, including granddaughter Amy.

He joined IBM Toronto in 1965 and worked diligently for them for 30 years. Gary loved to travel. After Michael’s death we made three major trips: a three-week bus tour of Europe in 1984, a two-week eastern Mediterranean cruise, including Italy Israel and Egypt in 1985 and a two-week tour of Japan and mainland China in 1986. After retirement, we sold our house, bought a motorhome and travelled in Canada, the U.S.A and Mexico. After 10 years of travel, we bought a home in Kelowna, B.C.

Besides his love of travel, Gary read non-fiction books about the second world war and the civil war in the U.S. He was an avid news junkie, especially about U.S. politics. Gary’s other interests were following baseball and American football. He built a model railroad in our crawl space by himself over 13 years. It would be the envy of any railroad club. He loved to entertain his friends. Dogs were also a big part of Gary’s life.

A very big thank you to our family and friends who supported us through this long journey of Gary’s.

I would also like to thank our Interior Health nurses who were so faithful in providing care for Gary until he went to Hospice House the week before Christmas. Hospice House was beyond amazing in their care for Gary. Memorial donations may be made to Central Okanagan Hospice House, c/o Kelowna General Hospital Foundation, 2268 Pandosy Street, Kelowna, B.C. V1Y 1T2.


The service for NUSON, Gary Warren is scheduled for 1:00 p.m. on Monday, January 13, 2020. Below you will find the map for the service location and the contact information should you have any questions.