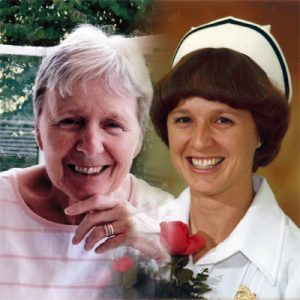 Carol Ann O’Connor (RN, BSN) passed away on December 12, 2019 in Kelowna, BC after a long illness. She is survived by her husband, Bob; daughters Shannon, Donna, and Debra; and brothers Mike, John, and Don.

Born in Richmond in 1944, Carol grew up and lived her early life in the Vancouver area. She met and married Bob in 1969.

She began a career in nursing in 1963, and she was in the first graduating class of nursing at the Okanagan College in the 70’s. Through Bob’s job, they lived throughout the province where she worked in a number of hospitals. Her greatest joy was working, in maternity at Grace, the Woman’s Hospital in Vancouver.

In 1990 when Bob retired, they moved back to Kelowna where she continued in the nursing field in Community Care Health. In Kelowna she was also active in hiking clubs, quilters guilds, and her favourite, the Sarsons Senior Craft Club. In their retirement, her and Bob travelled worldwide: Australia, New Zealand, Malaysia, South America, Europe, Africa, and especially Mexico (Bucería).

Carol spent six years in South Pointe Village Care Home, and particularly Reid’s Corner, where the care she received was exceptional, compassionate and caring. Her family doctor and friend, Marjory Doherty, is to be commended for her care and support.

At Carols request there will be no funeral. Her family and close friends will remember her at a Memorial in the springtime. As Carol would say:

“May the road rise to meet you, may the wind be always at your back, the sunshine warm upon your face, rains fall soft upon your fields and, until we meet again, may God hold you in the palm of His hand.”

May she rest in peace.

Final arrangements are by Springfield Funeral Home, if you wish to send a condolence, post photos or share a memory, please scroll down the page to the area called “Condolences”.