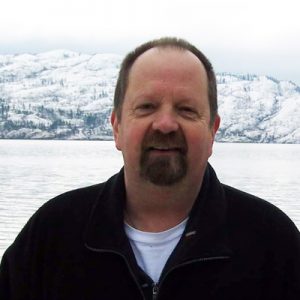 It is with great sadness we announce the passing of Laurie Odegard, 61, of Kelowna, BC on June 9, 2019 after a brief battle with cancer. Laurie left us far too soon and will be greatly missed by many. Laurie is survived by his two children Trevor Odegard and Shaylee Odegard; his sister Lynn Aigner; and many more extended family and friends. Laurie was predeceased by his parents Lloyd and Illene Odegard.

Laurie was born in Hanna, AB on August 10, 1957, then, the age of 10 years old, his family moved and settled in Kelowna, BC. He graduated from Immaculata High School in 1976.

Laurie took great joy in his craft as a field service technician with Ikon/Ricoh where he worked for nearly 30 years. He was also actively involved community sports such as volleyball and pickleball. He will be remembered best for his love of hockey and sunshine.

A Memorial Service will be held on Monday, June 17, 2019 at 1:00 pm at Springfield Funeral Home, 2020 Springfield Road, Kelowna BC. with a reception to follow.

In lieu of flowers please consider donating to the BC branch of the Kidney Foundation of Canada, www.kidney.ca. The family of Laurie Odegard wishes to thank the medical staff who worked closely with Laurie.

THIS SERVICE WILL BE LIVE STREAMED MONDAY JUNE 17 AT 1:00PM

Send Condolences
Send Flowers or a Sympathy Card
In lieu of flowers please consider donating to the BC branch of the Kidney Foundation of Canada. Link: www.kidney.ca


The service for ODEGARD, Laurie is scheduled for Monday, June 17, 2019 at 1:00 pm with a reception to follow. Below you will find the map for the service location and the contact information should you have any questions.