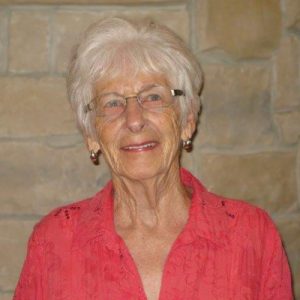 Born April 15, 1924 in Altario, Alberta, Barbara Odermatt passed away peacefully at home in Kelowna, BC with her family by her side on December 7, 2020, at the age of 96 years.

Barb came from a large family, parents Adam and Franciska Wagner, the 8th eldest of 14 children.

Barb was no stranger to work through her life.  She left the family farm in Baldonnel at an early age and got work associated with the building of the Alaska Highway around 1942 when the American soldiers were stationed in the area.  She later moved to Edmonton with her girlfriend and worked at a jeans factory, then moved back to Fort St. John where she was employed at the Providence Hospital caring for newborns under the direction of the Sisters of Providence.

In 1948 Barb married Raymond Mones, only to suffer the tragic loss of her husband in a boating accident one year later, leaving her with her first child on the way; a difficult time in Barb’s life.

Barb took a job at Sandy’s Milk Bar where she met Paul Odermatt and fell in love again.  Barb married Paul in 1951 and together they had 8 more children.  Barb was a busy mom rearing their large family as well as helping her entrepreneurial husband in his several business enterprises.  Through the years Barb and Paul were active in the Catholic Church, where Barb was a member of the Catholic Women’s League for over 60 years.  Despite their busy lives, Barb and Paul always found time to attend social functions associated with the church, especially if there was dancing involved.  Barb and Paul were both excellent dancers.

They left Fort St. John in 1974 to retire to the Okanagan, settling in Kelowna.  Barb took a job in Kelowna at the David Lloyd Jones retirement home, her first paid work since being single.  This gave Barb a new sense of confidence and independence which brought out her lively personality.

Barb loved flowers and gardening and enjoyed keeping beautiful gardens on the many properties they owned.  After several moves within Kelowna, Barb and Paul downsized to Sunrise Village, then to Wedgewood apartments.  After Paul’s death in 2012, Barb moved to the Village at Mill Creek to live out her later years, where she was the life of the community!  Barb’s sense of humour and lovely character blossomed through the years, which made her well-loved by all who knew her.  Barb was devoted to her family and to her Catholic faith.  She will be greatly missed.

Rest in peace Barbara in the arms of your Saviour.

A Private Funeral Mass was held on Friday, December 11, 2020, at Immaculate Conception Church, after which Barbara was laid to rest at St. Theresa’s Cemetery.