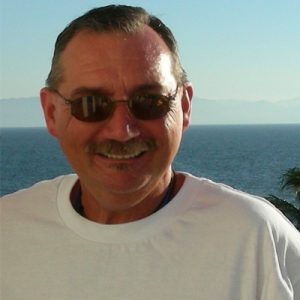 Robert Allan Omand, son of Allan and Sarah Jane (nee Parsons) Omand, passed away due to COVID-19 related complications on December 29, 2020, at the age of 74 in Kelowna, B.C.

Bob was born in Summerland, BC and spent much of his life growing up in Maple Ridge (Haney), BC. The first of two children, Bob was a rascal, his Mom even said so. She told stories about all the things that she would find in little Bobby’s pockets after he would return from his daily adventures, including rocks and frogs and snakes and other miscellaneous treasures. He was definitely a treasure hunter and outdoorsman his entire life.

Bob attended school in Maple Ridge, including Yennadon Elementary School and Garibaldi High School where he made numerous friends that he was still in contact with in his later years.

Bob’s family owned a mink farm on Silver Valley road until his Dad started working at the Hammond sawmill. Bob joined his Dad at the Hammond mill first on the cleanup crew and then as a grader. This is when he met Cheryl and they fell deeply in love.

Bob became a tree faller working and living on Vancouver Island in Port Hardy to save money for his upcoming wedding and honeymoon with Cheryl. They wrote letters back and forth to one another while Bob worked and Cheryl attended BCIT until they could be together.

Bob and Cheryl married on July 7, 1973, in Haney. They had 2 children, Corrine Marie (1977) and Jeremy Robert Thomas Allan (1981). Their family years in Boston Bar, Grande Cache and Mackenzie were extremely memorable, with Bob in the Lions Club,

playing baseball and working in the forest industry. He made friends easily, had an incredible amount of good times and was often described as “Fun Bobby” and “The Life of the Party”. Even in the toughest of times, when his wife struggled with Arthritis or when his son was in the hospital at a young age, Bob was positive and fun and always had a good time. Many people would say that Bob was “always there for us.”

Bob’s other memorable moments and events occurred on hunting trips with his friends and family, including his brother Bruce and nephew Jason, summers at the cabin near Powell River, fishing, camping, working a trapline near Grande Cache with Kelly Drolet, gold panning, metal detecting, travelling and spending time laughing and telling stories.

In his 60’s, after Cheryl passed away, Bob had a few short and one very meaningful love before travelling to Thailand where he met Lek (Wilai Bosuwan) and her daughter Christina. In typical Bob fashion, he had a heck of a good time and also fell in love both with Lek and with little Christina. He vowed to help them have a better life and returned to Thailand to marry Lek. She and Christina moved to Canada in 2016 and became his new family until Bob passed away at the age of 74 in Kelowna, BC.

Bob lived a life filled with kindness, generosity, fun and friendship. For much of his life, he truly lived in the moment and spread joy with his humor, tall tales and a great smile. He will be greatly missed by many people.

If you wish to share stories or memories, post photos or send a condolence, please scroll down the page to the area called “Condolences”.