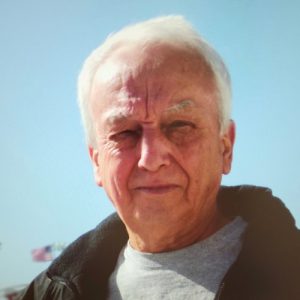 Terry Pattenaude was born in New Westminster, BC on February 10, 1944. At the age of 78, Terry passed away peacefully in his sleep on August 14, 2022, in West Kelowna, BC, after returning home from his final road trip to Reno for a car show with his friends Sandy, Jen and Tom.

Terry loved every thing to do with music and cars, he worked as a mechanic and owned a garage earlier in his life and later enjoyed DJ’ing private events “Mr. Musicv Man”.; he enjoyed working on his many classic cars including his ’57 Chevy Bel Air, several Chevy Corvette Stingrays, Camaro and most recently his Ford Mustang GT Convertible; He loved watching the drag races – and he was a member of the NHRA (National Hot Rod Association)- His races took him throughout North America.

Predeceased by his father Lawrence and mother Renneth, and his beloved dogs Chelsea and more recently his loyal companion Buddy, Terry is survived by his son, Mike; (Jennifer); and grandson Caleb and several other family members and friends.

A special thanks to brother-in-law Barry Woodward and Terry’s close friends Sandy Ratcliffe and Lorne Valin for their caring of Terry in his last years.  And also thanks to Carol Gilbert for her support during this difficult time.

In lieu of flowers, donations may be made to the BC SPCA.

Family are going to ensure that Terry gets to go on a “Last Ride” in his Grey Mustang Convertible, as they travel to the lower mainland with his urn.

A Graveside Service will be held on FRIDAY, SEPTEMBER 9, 2022, at 1:00 PM, at FRASER CEMETERY, 100 Richmond St, New Westminster, BC. with a reception to follow.

“Take it easy, take it easy.  Don’t let the sound of your own wheels drive you crazy.  Lighten up while you still can, don’t even try to understand.  Just find a place to make your stand and take it easy”


The service for PATTENAUDE, Terrance Michael “Terry” is scheduled for FRIDAY, SEPTEMBER 9, 2022, at 1:00 PM. Below you will find the map for the service location and the contact information should you have any questions.