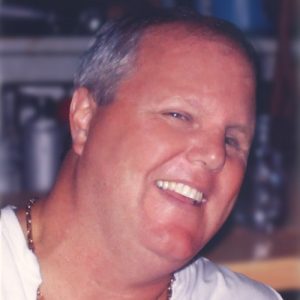 Steve left us sooner than we would’ve wanted, but we all hope he’s happy, dancing to his own groove, and is tickity-boo.

Steve was born in Vancouver, BC and grew up in Richmond, BC, and Nelson, BC before moving to the Okanagan’s Carr’s Landing (Lake Country, BC) in 1998. He recently moved from there to start a new undetermined chapter in his life.

In his 56 years, he mastered many talents including commercial fishing, moving with Laporte Movers, welding and being a mechanic. He could help you fix your car, from his couch, over the phone, and he would trade services for a two-four. His love was his ’57 Chevy Belair 2-door wagon which turned many heads as he drove by; he was currently re-doing it for the second time to make it go faster. His second love was live music and jam sessions where he could get bands to, maybe, play a little longer, maybe. His idea of a good time was being in his boat with friends, food and drink, and gathering around fires – the bigger, the better.

He might’ve coloured outside the lines at times, and his way was the “right way”, but he had a big, caring, and loving heart.

Steve leaves his friend Tana- Marie and little buddy Mojo with many memories of boating with friends, parties, and Mexico. He is also survived by his son Cody Hort (Alyssa), and his grandson Corbin; his dad Ed Patton (Dorothy Robertson); his mom Marilyn Patton; his sister Kristine (Tim Day), and nephew Max and niece Brie; and his brother Dean Patton. He was predeceased by brother Darrell Patton (d. 2009).

On Steve’s behalf, his family sends a special thank-you to Jason, Tim, and Jimbo for all the recent help they gave Steve.

In lieu of flowers, please raise a glass in his name and turn up the music. A celebration with friends and family will be at a later date. Anyone that would like to share photos and memories can send them to ttmarie@telus.net or scroll down the page to the area called “Condolences”.