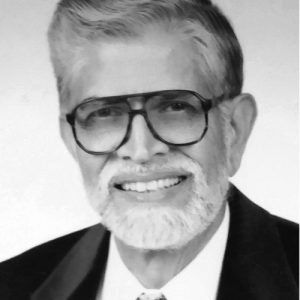 Murli was born in a small village in rural Maharashtra, the third youngest of eleven children.  His mother taught them all to sing their addition and multiplication tables before they were old enough to go to school, preparing him early for his chosen career as a math teacher.  Murli left home at an early age to continue his education in the city, often with very little money for the basics of life, but with lots of enthusiasm for the idea that education was the way out of poverty.

He met and married his wife of 68 years, Sudha (formerly Pandit), when he was still a student and miraculously managed to convince her family that he would be a good husband, even though he was penniless at the time and had to borrow money for the wedding.  They married in 1953, he became a teacher, and they headed from India to Tanganyika in East Africa shortly thereafter, where he launched his career as a math teacher in a British school.  In Tanganyika, the young couple had three children in four and a half years.  Just as the country was preparing to become independent, Murli was able to secure a position as a math teacher in rural Saskatchewan over a telegram.

Murli, Sudha, and their young family arrived in Luseland, Saskatchewan in the fall of 1961 just as winter was about to set in.  The people of Luseland adopted the new immigrants into the community to ensure they became comfortable in their new home.  These neighbours became life-long friends.  During the first years in Saskatchewan, Murli spent every summer in Toronto, ON where he completed his B.Ed and M.Ed at the University of Toronto. This prepared him for his future in school administration.  During his seven years in Luseland, after being a well-respected Math teacher, Murli became Principal.

The next stop on Murli’s career was in Rockglen, Sasktachewan, where he was school principal of a larger school.  Occasionally he took time out to go ice fishing or to take the family on long, hot car trips in the days before A/C.

In 1972, Murli was able to secure a position as Principal of Mission Junior Secondary and the family made the big move to British Columbia.  A farm boy at heart, Murli loved gardening and was thrilled to see that he could grow so much more in a smaller garden on the west coast.  He quickly made himself known as a hard-working and influential educational leader and was appointed Superintendent of Schools by the BC government.  His first post was in North Thompson, in Clearwater, BC where he was posted for three-quarters of the time.  His other assignment was to help out in smaller districts, and during this time he worked in several remote, indigenous communities. In 1978, Murli was selected to be Superintendent of Schools in School District No. 23 (Central Okanagan) where he completed his career and retired in 1986.  For his final year as an educator, Murli returned to a small town in Saskatchewan. Oungre, Sasktchewan needed a Principal and math teacher for one year, and Murli wanted to return to his roots and take advantage of an early retirement incentive that was available only in Sasktachewan.  So, after years of leading a large district, he returned to teaching and was able to retire at 56.

Murli worked just as hard in his retirement as he did when he was working.  He enjoyed politics and ran in two federal elections for the Liberal Party as well as becoming a member of the School Board for SD #23, acting as board chair for several years.  He volunteered extensively in the community in the following organizations:
Canadian Red Cross – 4 years
Kelowna & District Society for the Mentally Handicapped – 3 years
Kelowna & District Credit Union – 9 years; elected director 3 years
Founding Chair Okanagan Similkameen Regional Health Board – three years; board member – 1 year
Member Rotary Club of Kelowna since 1978; coordinated a water & sewer project in Amreli, Inda from 1998 – 2007 and lead many Rotary trips to the area; other Rotary projects included coordinating the collection and distribution of medical supplies to underdeveloped countries and working with the Rotary Youth Exchange Program.
RCMP Victim Services volunteer

In 2011, Murli was diagnosed with cancer and told he may have 6 months left – the doctor encouraged him to do whatever he could while he was still feeling well.  This was the beginning of about 8 years of travel, much of it on cruise ships for Murli and Sudha.  He did not feel like it was his time to go!

In May 2019, while on an excursion to a casino in the US, Murli had a minor stroke.  This was a major turning point for him – he was not able to enjoy his many passions and was often frustrated that he could no longer “get a job”.  He died peacefully in Hospice House July 12, 2021, with Sudha by his side.

Murli is survived by his wife, Sudha; his son and daughter-in-law, Milind and Priti of Kelowna; his daughter, Madhuri of Vancouver; grandchildren Shanta (Adam), Sharmain(Steven), Kaleb (Sheetal), Kiran, Paloma (Thomas), and Vinayak; and two great-grandchildren Nora and Remy.  Murli was predeceased by his son Shashank (Shaz) in 2014.

The family wish to thank Interior Health for their extensive support through the Palliative Program and the Cancer Centre as well as Dr. Elizabeth Benade, family physician.

Location
A Come & Go Memorial Open House will be held at the Pendharkar please RSVP to madhuri1555@gmail.com by Thursday, July 15, 2021 at noon.


The service for PENDHARKAR, Murli is scheduled for Sunday, July 18, 2021, from 1:00 - 6:00 pm. Below you will find the map for the service location and the contact information should you have any questions.

A Come & Go Memorial Open House will be held at the Pendharkar please RSVP to madhuri1555@gmail.com by Thursday, July 15, 2021 at noon.