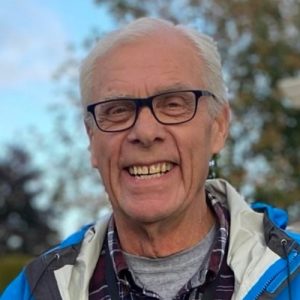 To know Ernie was to love Ernie.  He will be remembered for his big smile, hearty laugh, friendly personality, warm embraces, and deep faith.

Ernie was born near Groningen, Holland on August 11, 1947 to Gerrit and Marie Penninga.  He was the youngest of three children.  In 1952, his family immigrated to Canada, arriving in Manitoba.  His family moved west 13 times across Canada before finally settling in Rutland, BC in 1957.  He left school after Grade Nine to help his father in their meat shop, Rutland Meat Market.  This is where Ernie learned the trade that would serve him for the next forty years.

In 1976, after working as a salesman for several years, Ernie and his business partner started Bonanza Meat Packers. Six years later, he sold his half of the business, and in 1983 he started his own business called Kelowna Custom Meat Cutting.  Ernie successfully ran this company for 19 years until he retired in 2002.  He was well-loved by his customers, who knew him as fair, friendly and hard-working.

Ernie was known for his strong faith and his desire to help others.  He served his church as an usher for many years, and more recently helped with a seniors group at Kelowna Gospel Fellowship.  Ernie had a heart for missions and enjoyed serving on three short-term missions trips to Ecuador (1994), Romania (2000), and Mozambique (2002).  From 2004 to 2021, he could be found volunteering every Tuesday morning at the Perking Lot (in Kelowna General Hospital), where he cheerfully served up coffee and smiles to anyone who came to the counter.  At Christmastime, Ernie could often be found ringing a bell and collecting donations for the Salvation Army, an organization that made a difference in his own life as a new immigrant to Canada so long ago.

In his spare time, Ernie enjoyed reading, gardening, cycling and travelling.  He and Ruth visited over 40 countries during their adventures together.

Ernie leaves behind his loving wife of 52 years, Ruth; his children, Martin (Lisa), Michael (Jeanne) and Melanie; and his beloved grandchildren: Mira, Weston, Nate, McKinley, Koen and Brodie.  He is also survived by his sister, Ruth (Mo) Umran; his brother, Hank (Cheryl) Penninga; brother-in-Law, John Epp; sister-in-law, Rene Poole; sister-in-law Carol (Ken) Rempel; and many nieces and nephews who loved him very much.

In lieu of flowers, donations may be made to Gideons Canada, or a charity of your choice.

Ernie’s Celebration of Life will be held MONDAY, MAY 23, 2022, at 1:00 PM (PDT) at KELOWNA GOSPEL FELLOWSHIP, 3714 Gordon Dr, Kelowna, BC.  If you are unable to attend in person, please join the family online by Livestream at the time of the service (to be posted prior to the service), a recording will be made available to view shortly thereafter.


The service for PENNINGA, Ernst is scheduled for MONDAY, MAY 23, 2022 at 1:00 pm. Below you will find the map for the service location and the contact information should you have any questions.