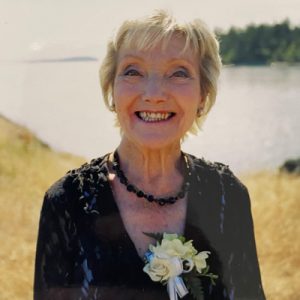 Babs was born January 9, 1919 in London, England where she lived with her mother and father and her older brother, Harry. The happiness she felt during her childhood would remain with her all the days of her life. Tragedy hit the family when she was 17 years old and her mother died. Her father later remarried, and she became close to her stepbrother, Colin.

At the beginning of World War II, after only knowing each other 6 weeks, she married Ronald Puiu in a modest civil ceremony, who soon after was stationed in South Africa during the war.  When he returned four years later, they had their only child, Keith. During their days together, they enjoyed coastal holidays and a peaceful family life. They retired on Vancouver Island, Canada for a short time to be closer to Keith and his family but returned back to England where they would live out the rest of their marriage, until Ron passed in 2005 just shy of their 65th wedding anniversary.

Upon Ron’s passing, she moved back to Canada with her son Keith and daughter-in-law Taya where she lived for the next 15 years. In her last chapter, she embraced her independence, traveled much, and was grateful for good times with family and friends. Babs had a special relationship with her grandson Christian, and with their 91-year age difference, was a gift to witness for all who knew them.

Babs will be remembered for her good genes, infectious laugh, love of a good Sherry, and her small frame and big heart. She touched and inspired people wherever she went.

Bab’s wishes for interment are to have her ashes scattered with her mother in Lewisham England, with her husband Ron over the cliffs of Kilve, Somerset, and on the Sunshine Coast, BC. A tree will be memorialized at Kelowna Memorial Park Cemetery in her name.

The family would like to thank the nurses at David Lloyd Jones Home for the care of their mother in the last year of her life and the congregation at St. Mary’s for their love and prayers.

Due to Covid-19, details for the memorial service will be announced at a later date. If you wish to send a condolence, post photos or share a memory, please scroll down the page to the area called “Condolences”.