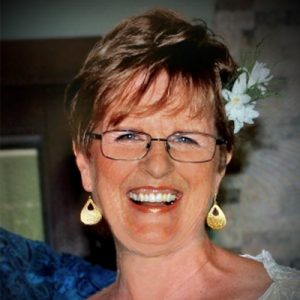 Janis Rae Purvin-Good, age 75, passed away peacefully in the Kelowna General Hospital on December 30, 2020. She was born to parents of modest means, but she lived a very rich life filled with family, friends, laughter and joy.

Born in Winnipeg, Manitoba in 1945, she spent her early childhood in the remote mining town of Atikokan, Ontario, later settling in Claresholm, Alberta, with her parents Lilian and Ken Smith. Though Jan was an only child, she had a large extended family on her mother’s side, with whom she maintained close connections over the years. She had many fond memories of spending time with her grandmother, aunts, uncles and cousins at the Bjarnarson family farm in Gladstone, Manitoba.

Living in Claresholm, she grew to become a tall, smart, attractive young woman who was a stand-out both academically and on the women’s basketball team. She had many friends and broke more than a few hearts. Her mother was the center of her world, and Jan shared many of her mother’s most admirable traits—hard-working and sharp, with no patience for nonsense, a touch of the fiery redhead in her, but with love and warmth unafraid to show itself.

Small town life shaped who she was, but she aspired to more than what a small prairie town had to offer. She moved to Calgary to attend nursing school, where she acquired both her nursing certification and lifelong friendships. There she also met her first husband, Wayne Pettit. Together they had two children, Dean and Denise. She was fiercely devoted to her children, ever a loving mother and lifelong friend to them both.

The family moved to Kelowna in 1981, trading in the harsh Calgary winters for the sunny Okanagan, which would be her home for life. She raised her children and formed many enduring friendships in the community. For many years she worked as a nurse for Dr. Milt Stevenson. She was a dedicated, hard-working and compassionate nurse, and touched many lives in the community. Many of her former patients would remember her long after she left nursing.

After the children were grown, she started the next chapter of her life with her current husband, Keith Purvin-Good. He was the love of her life, and they worked tirelessly to build a new life. They built a beautiful home together in Lake Country overlooking Lake Okanagan. Both avid DIYers, they oversaw the construction and did a lot of the work themselves. Their home was a labor of love and ever a work in progress. The consummate nester, Jan could always find some room in need of painting and redecorating. Their home was a welcoming oasis for friends and family for many years, an expression of her loving spirit and the love she and Keith felt for each other.

It is a testament to her character, and to Keith’s, that she remained good friends with her first husband, Wayne and his wife Lynn. The four of them socialized together and in their later years took care of each other as they aged.

Jan and Keith started a family law practice which they carried on out of their home until they retired. Jan left nursing and trained as a legal secretary and licensed mediator. Bringing the same energy and compassion she put into nursing, Jan touched many more lives through their practice. Working together made them ever closer and closer. They were never happy separated from each other.

Then came the grandchildren. And Jan stepped into this role easily and eagerly. Though it would be more accurate to say that she lobbied heavily for this role for many years, until her children and Keith’s children obliged her and started having children. She was ultimately blessed with seven grandchildren—Heath, Alex, Piper, Mitchell, Isabella, Max, and Livy—and could not get enough of them. She was the quintessential grandma, and she loved and doted on those kids. She spent as much time with them as she could, which was a great blessing. She and Keith worked tirelessly to make their home a warm and welcome place for them, and they travelled often to see them and be part of their lives.

Jan and Keith celebrated their love in a wedding ceremony on a beach in Hawaii, surrounded by family and friends, and their precious grandchildren. It was a beautiful occasion and a happy memory for all. In retrospect, it was a perfect tribute to celebrate their love with everyone, grandchildren and all. Their love is a generous love.

Jan was a bright light in the lives of so many. She was a loving wife, mother, grandmother and friend. She lit up around other people. Her smile and her laughter were contagious. She was loving, supportive and empathetic. She was fun, animated, and at times fiery and passionate. She had a great sense of humor and loved to share stories. She loved to talk, but she was also a good listener. To those she loved, she always offered her shoulder to cry on and opened her arms in embrace.

She enriched the lives of those around her through her warmth, generosity and love. No words can adequately capture her joyful loving spirit or the spark of her personality that made her so special. Mere words can only serve to gesture at the warmth and love experienced by those who were blessed to know her. Those who experienced that love will always feel it, and the light she brought into this world will endure through the lives she touched.