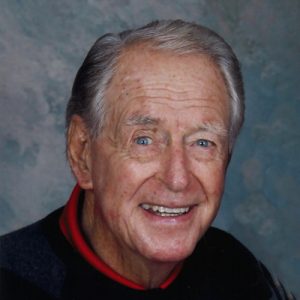 He is survived by Carole, his loving wife of 69 years; his daughter Debbie (Gene); sons Richard and Brad (Diane); his grandchildren Spring (Matt), Sephorah (Ryan), Vanessa (Matt), Jasna, Isaiah, Owen, Ethan, and Sean; and his great-grandchildren Easton, Cohen, Eleana, and Brenna. He will be sadly missed by his nephew Douglas (Sarah); and his niece Cathy; also Anna Maria and Tracy. He is predeceased by his sister Gwen, brother Bill, and sister-in-law Irene.

Born September 16, 1929 in Prince Albert, Saskatchewan, he died August 21, 2020 at Kelowna Hospice after an 8-month struggle with failing health started by a fall in January of this year.

Dick completed school in Vancouver and earned his MBA from Columbia University in New York while working for Coca-Cola. He was a proud employee of Coca-Cola for 43 years, rising to the top of his profession as President of Coca-Cola Bottling and Vice President of Coca-Cola Canada. His work took him and his family to 4 different provinces, and he retired in Ontario before moving back to BC which he always said he would.

He and Carole travelled to many parts of the globe with Coca-Cola and on their own. Their last trip was in 2018 to Paris and a Seine River cruise. They made many friends and lasting memories over their 69 years together.

Dick played hockey in his younger years and gained quite a reputation; later he coached youth hockey. For most of his life and until just 2 years ago he was an avid golfer. He and Carole spent the last 23 years at Gallagher’s Canyon in Kelowna enjoying that lifestyle in the spring, summer, and fall while commuting to Bradenton, Florida for the winter.

He was a loving and generous husband, dad, grampy, and great-grampy and he will be forever missed. In his own words, “his was a life well lived”.

There is no service planned right now due to the COVID-19 situation. Should family and friends so desire, memorial donations may be made to a charity of your choice. If you wish to send a condolence, post photos or share a memory please scroll down the page to the area called “Condolences”.