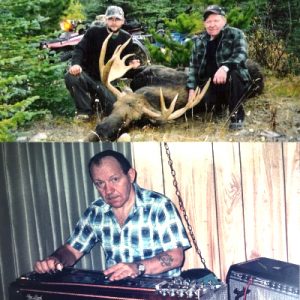 Lawrence Elmer Rashke passed away May 9, 2020. He is survived by his 3 daughters: Rhonda, Debbie (Remi), Brenda (Edward); his 7 grandchildren: Robert, Keith, Michael, Katrina, Alicia, Lorna, and Jenna; his 8 great grandchildren; his siblings: Harry, Herbie, Gordie (Pat) and Lorraine (Rudy). He is predeceased by his loving parents, Robert and Sarah and eldest brother, Ed.

Lawrence was born in Okla, Saskatchewan on January 28, 1931.He started playing the pedal steel guitar in 1946. He was a talented steel guitarist who grew up playing in different bands over the years including “Pete Stoltz and His Music Pals”. Over the years of playing music, he made a lot of lifelong friends, who he would jam with regularly.

He loved music, the outdoors, gardening, hunting with his grandsons, and potatoes – his mom called him “potato belly”. He passed on a lot of wisdom, love and strength to his children and grandchildren.

Over his life he was a long-time mill worker, licensed practical nurse and city policeman. He had many adventures in his life and a lot of stories to tell about all his experiences. He was brave and strong and will be missed more than words can describe.

He is now at peace in heaven, playing his steel guitar again.