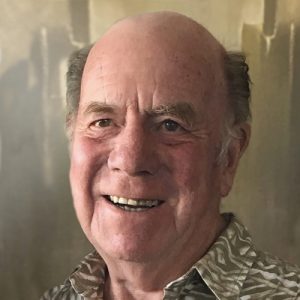 John passed away peacefully on June 1, 2020 after a short battle with cancer at the age of 82.  He is survived by his wife of 23 years Judith Mary (née Gusdal) and was predeceased by his wife Sandra.  John will be greatly missed by his sister Diane; daughters Karen (Rory) and Nichola; and grandchildren Kaleigh, Joshua, Rhys, and Claudia.  He was lovingly embraced by his extended family including stepsons Chris, Daniel, and Graham Saunders, seven grandchildren, and six great-grandchildren.

John left school at 16, full of confidence with only a vague idea of a career and a sense of being good at Science.  He started work as a Junior Technician in the Organic Chemistry Labs at the National Institute for Medical Research near London, England.  At age 20, after having joined Unilever and meeting Sandra he undertook a 12-year journey of training and education that culminated in his PHD in 1970.

John had a long and distinguished career in food science with Unilever, Rowntree Mackintosh (Nestle), and SunRype.  His varied career led to expertise in ice cream, chocolates, and fruit products in both the science and the manufacturing process. John felt that his work done on the evaluation of the first fluoride agents for toothpaste was by far the most important project of his career.  Ironically, his grandkids thought that it was the introduction of Blue Smarties that should be number one.

In retirement, John and Judith enjoyed entertaining friends and family in Kelowna, BC.  His passion for science and helping others led to his volunteering with Canadian Executive Service Organization (CESO).  With CESO, John and Judith were able to travel and work with local businesses in Ghana, Poland, Armenia, British Guyana, Panama, Nicaragua and build great memories.

John will be remembered as a wonderful husband, father, friend, and listener who had the capacity to inspire and enrich the lives of so many people he met with his generosity of spirit.

A Celebration of Life will be held in Kelowna later in the summer and in England in the Spring, the dates will be announced when current restrictions on gatherings have been lifted. If you wish to send a condolence, post photos, or share a memory, please scroll down the page to the area called “Condolences”.