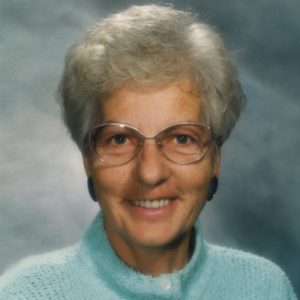 Jean was born on May 13, 1933, in Calgary, Alberta and died on August 1, 2022. She is survived by her children Louise (Dave) Wright, Teresa (Wally) Watson, and Roger (Amy) Reveyrand; her pride and joys, her grandchildren Melissa (Aaron) Hannam, Mercedes (Nick) McDonald, Kimberly (Scott) Skura, Whitney Reveyrand, and Jacquelyn Reveyrand; and great-grandson Callum Skura. Jean was predeceased by her siblings Alice Wilson, Elaine Beecroft, and Bob Wensrich.

Jean was born and raised in Calgary, Alberta in the Hillhurst area. She was the only one of her siblings to be born at home. Jean married Maurice Reveyrand (d. 2017) in Calgary, Alberta on February 14, 1953. In 1966, she moved with her family to Kelowna, BC, when Mau obtained a teaching position there. Jean quickly obtained an office position at Interior Floor and Supply, where her many talents were highly valued by her employers. In 1978, she began working as a library aide in elementary schools, a job she loved because of the contact with the young children. She worked in several schools in the Kelowna area. She retired in 1993 and quickly became a very dedicated golfer.

Jean, along with Mau, were both active members of the Kelowna Springs Golf Club and founded the annual Super Seniors Tournament there. Many of those friendships carried over to her post-golf life. In addition to her compassion for others, Jean was loving, loyal, intellectually curious, and always superbly organized. She was passionate about current events and maintained a keen awareness of what was happening in many sports.

The family would like to thank Dr. Canning for many years of care; her friends, near and far, and neighbours who helped to make the past few years a rich life; and the staff and volunteers of Hospice House Kelowna, who made her final days peaceful.

At Jean’s request, there will be no service. The family will hold a private gathering at a later date.

Memorial donations may be made to Hospice House Kelowna, the Kelowna Women’s Shelter, or the Kelowna General Hospital.