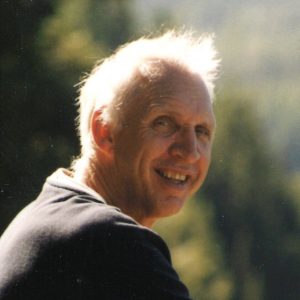 James Peter Rigby, always known as Peter, born December 30th, 1948, was the third child of four born to proud parents, Mason and Joan Rigby of Belleville, Ontario. Peter was predeceased by his older sister Beverley and is survived by his brothers Paul and Stephen, his first and only biological child, Tamara, and his stepsons Dean and Scott.

Peter was raised in a Christian home, spending his early years in Ontario before moving out west when he was 12 years old. His parents, Mason and Joan bought a little house on oceanfront property, and together they settled into life in Gibsons, BC. Peter attended Elphinstone Secondary School prior to leaving home to complete his high school education in Caronport, Saskatchewan. After graduation, Peter moved back to BC and pursued various educational and vocational opportunities before accepting a job at the local Super Valu grocery store. He was promoted to store manager and became a familiar face at the store for many years. Because of his height, many at the store referred to him as the Giant.

In his younger days, Peter was an avid sportsman. He competed on many teams including late night hockey, baseball, and the local Rugby Club. He enjoyed watching sports of all kinds (including ping pong and bowling if that was all that was on). He was also quite the handyman doing many renovations and improvements to his 5-acre property in Roberts Creek.

On March 19th, 1983, Peter welcomed his first and only biological child, a daughter, Tamara, into the world. He married Sherry in 1984, including two steps-sons, Dean and Scott, into his life.  Peter and Sherry had ample opportunity to practice patience in parenting as they raised Tamara, Dean, and Scott together. Special memories for the family include Christmases starting at 5am, chopping and stacking firewood, riding dirt bikes in the back field, camping trips in the 5th wheel, and countless hours spent in the family swimming pool. Peter coached Tamara’s softball team and was a very supportive father.

His father’s death, in October of 1992, led to a vocational change and spiritual transformation in Peter’s life. It was at this time that Peter left his position at Super Valu and returned to the Pulp Mill where he worked until his retirement in 2008. After walking away from his Christian faith for a time, it was his father’s passing, that brought Peter back to the Lord. Peter was eager to learn and grow in his re-found faith, was baptized, and began studying the Bible. Peter attended many Christian seminars and began leading Bible studies in his home, finding much fulfillment from this ministry. Serving as a deacon in his local church, Peter had the opportunity to serve alongside Tamara and the church youth group at an orphanage in Vicente Guerrero, Mexico. Everyone they met, loved the ‘gentle giant’ from Canada.

His daughter Tamara went on to pursue further education in Kelowna where she met and married a local – John Paul Casorso. Following Peter’s retirement, he decided to relocate to Kelowna, BC to be closer to Tamara and her husband. The Casorso Family welcomed Peter as a brother and included him in every family dinner and event. He joined in on camping trips, volleyball games, weddings and was accepted as a treasured member of the family.

Peter was overjoyed to welcome his grandson, Mason, named after his own father, in August of 2009. Peter took on the role of caregiver two days a week when Tamara returned to work part time. He became best buds with his grandson Mason and they made many special memories together. Welcoming three more grandchildren over the next few years, Lucia in 2011, followed by twins, Janelle and Clara in 2014, Peter enjoyed his grandkids very much and was always happy to welcome a child into his lap for a story.

Struggling with Parkinson’s Disease, Peter was unable to enjoy many of his previous activities and could often be found sleeping – though Peter would tell you that he was “just resting his eyes.” Peter moved into Mountainview Village in 2014 and quickly made new friends! He was often invited to join a game of bridge or crib, but he also loved to spend his time building puzzle after puzzle. Participating in the various events held by the Mountainview community, Peter read a poem as a part of this year’s Christmas play just a day before his passing.

We are so thankful for the amazing staff at Mountainview Village for their care and friendship to Peter. We would also like to thank Dr. David Whiting and Dr. Dermot Adams for their care through the years.

We will miss our friend, brother, uncle, grandpa, and daddy very much. Peter truly was a generous, kind, funny, loving person and we are so saddened by his quick and unexpected passing. Peter leaves behind a legacy of love that will not soon be forgotten. We are so grateful for his declaration of faith and his love for Jesus Christ. We can be assured that he has received a new body, free from disease, and is rejoicing with our Savior.

A Funeral Service will be held on Thursday, January 2, 2020 at 10:30 am at Springfield Funeral Home, 2020 Springfield Road, Kelowna, BC. In lieu of flowers, donations may be made to Parkinson Society BC, www.parkinson.bc.ca or Child of Mine, www.childofmine.ca.

THIS SERVICE WILL BE LIVE STREAM THURSDAY JANUARY 2 2020.

Send Condolences
Send Flowers or a Sympathy Card
Parkinson Society BC or Child of Mine Link: www.parkinson.bc.ca, www.childofmine.ca


The service for RIGBY, Peter is scheduled for Thursday, January 2, 2020 at 10:30 am. Below you will find the map for the service location and the contact information should you have any questions.