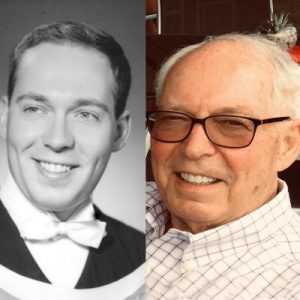 George was born April 24, 1935 in Regina, Saskatchewan to William Stanley Robertson and Winnifred Evelyn Robertson (nee McKay) who, along with his sister Catherine, had moved from Calgary years earlier. George attended Lakeview Elementary and Central High in Regina before the family moved back to Calgary in 1949 where he attended Crescent High School. The sudden passing of his father in 1951 led to a move to Edmonton where George and his sister would attend the University of Alberta. George received his BA in Economics, then enrolled in Law graduating in 1959. The comradery and fellowship he found as a member of Phi Delta Theta was of continued benefit in his life. He often said it strengthened his ability to express himself professionally and socially. He relished the sporting activities at the U of A and later on badminton at the Royal Glenora Club. George was politically and socially active being a leader in the formation of the Progressive Conservative Party of Alberta and the Progress Club of Edmonton. He and Jill thoroughly enjoyed the charitable functions they attended. Season tickets to the Edmonton Oilers and Edmonton Eskimos were a must along with a Sunday game of touch football when the weather permitted. Practicing the law that he loved until his retirement in 1991, George and Jill moved to Kelowna where he frequently referred to himself in jest as “a recovering lawyer”.  Kelowna opened up a new chapter in his life filled with joyous gatherings of family and friends, wine making, golf, skiing, tending to his orchard, and gardening. He tackled and perfected many new skills as diverse as framing concrete footings to grilling pizza on the BBQ. His granddaughters loved “Grandpa’s Salmon”. For all the international travel he enjoyed his favorite place was home.

He enjoyed the love, respect and comradery of a diverse group of friends – a gift at any time but never more so as later in life.

“Unable to perceive the shape of you I find you all around me. Your presence fills my eyes with your love. It humbles my heart for you are everywhere.”  Jalal al-Din Rumi. My love always, Jill.

The date for the Celebration is yet to be determined. In lieu of flowers, donations may be made to the Hospice House, hospicehousekelowna.com.