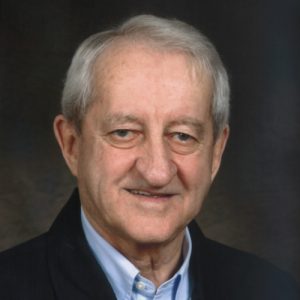 On May 11, 2022, our beloved ‘Captain’ set out on his final voyage – to where waters are still, calm and bright; and where the sun is shining and fish are plentiful. Armand leaves in his wake his loving wife of 65 years, Shirley; siblings, Edith, Liliane and Eveline; and sister-in-law, Elaine Borden. Armand was predeceased by his parents Noe and Luce, and his brothers, Paul and Marcel. Armand will be missed by many other family and friends.

Driving vehicles was his passion. It commenced with farm machinery, his privately-owned school bus in Slave Lake, Alberta, followed by 33 years of school bus driving in Kelowna, BC with School District # 23. His driving earned him a fait accompli by driving over 1 million miles ‘accident free’, an honour bestowed upon him by the School Board and Minister of Highways in 1987.

Armand’s quick wit and humour sparked many. From an early age, Armand was active in sports, playing softball, hockey, pool and cards (especially cribbage). Armand also took on curling, snowmobiling, biking, fly-fishing, and hunting. Every July and August, fishing took him to Campbell River for five decades. His passion for the outdoors caused him to build a mountain cabin at Headwaters, north of Peachland. Weekends at his cabin were filled with friends, adventure, and entertainment.

From 1995, in retirement, he spent a decade as Board Member with the Kelowna Parkinson Senior Society, and became a lifetime member.

Armand received excellent medical care during his lengthy ailments, a huge thanks to his health care workers. As well, Armand wishes to give thanks to the doctors and nurses at Kelowna General Hospital for their compassion and care in his final weeks. To his M.D., Dr. Wendy Wickstrom, much gratitude for her extensive and long term care.

In Memory of Armand, you may consider making a donation to cardiac care through the KGH Foundation or Central Okanagan Hospice Association.

No service at this time.

God grant that I may live to fish until my dying day
and when it comes to my last cast, I then most humbly pray,
When in the Lord’s safe landing net I’m peacefully asleep,
That in His Mercy I be judged as big enough to keep.