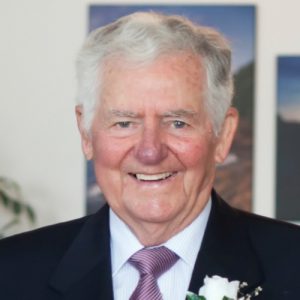 William Rodden was surrounded by family at the Okanagan Hospice House, when he peacefully went to be with the Lord on Monday, January 9, 2023.

Born in Edinburgh, Scotland, Bill immigrated to Canada in 1952, where he met and married the love of his life, Terry. In 1961, he graduated with RIA/CMA designation in accounting. Among his many achievements, he was President of the CMA of Canada in 1987 and was awarded his fellowship in 1988; he was a Grand Knight of the Knights of Columbus; and he worked with the Society of Saint Vincent de Paul. He was an avid golfer, curler, and world traveller. Bill was richly blessed with a large and loving family.

The family would like to give special thanks to Unit 4A at the Kelowna General Hospital, as well as to Hospice House, for the wonderful care he received.

In lieu of flowers, donations may be made to Society of Saint Vincent de Paul.

A Funeral Mass, with Father Gabriel Chinnaperiannan presiding, will be held on JANUARY 12, 2023, at 10:30 AM (PST), at ST CHARLES GARNIER PARISH, 3645 Benvoulin Rd. Kelowna, BC, a reception will follow. If you are unable to attend in person, please join the family online by Livestream at the time of the service (see below), a recording will be made available to view shortly thereafter.


The service for RODDEN, William is scheduled for JANUARY 12, 2023, at 10:30 AM (PST). Below you will find the map for the service location and the contact information should you have any questions.