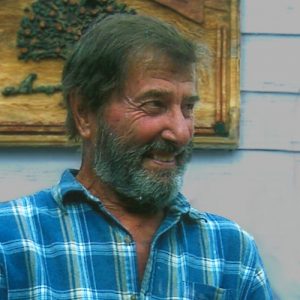 It is with heavy hearts, but also wonderful memories, that we announce the passing of David Albert Ross on January 19, 2021.  He is survived by his brother Ken; loving wife of 55 years, Edithe; sons Charles “Chuck” (Natalie) and Dave Jr. (Theressa); daughter Patricia “P.J.”; grandchildren Curtis, Sarah, Elizabeth, Thomas, and Logan; and special Grandchildren Martin, Nicole, Amanda, Breanna and Erika.

David was born in Kelowna General Hospital on July 16, 1937.  In February 1942 David and his parents, Charles and Tillie Ross, and baby brother Ken moved to the orchard property in East Kelowna, BC where the family still resides.  He went to school in East Kelowna and Graduated from KSS.

In 1965, he met and married Edithe Philpott, daughter of Cecil and Inez Philpott.  They began their life adventure in January of that year, were engaged in April and married in July.  It was the beginning of a “good thing”.   The orchard was where they lived, but David’s passion was Trucking.  He loved driving and spent many years driving the rigs for many different companies.  He hauled ore from Brenda Mines, Freight from Kelowna to the coast, gravel and asphalt for MidValley Construction and his special love… hauling logs.  He had a special spot for logging; starting out with Roth Brothers Logging and then for his father-in-law Cecil Philpott, brother-in-law Monte, and McClelland Logging.  In later years he had his own rig; a beautiful blue Western Star Logging Truck… Logo on the side that read Crockett “My 747”.  He was an excellent driver and an even better friend.

He took the time to teach his sons the value of looking after a piece of equipment whether or not it was your own.  His love of the outdoors he passed on to his children.  He spent time hunting with his sons and showed them the beauty of the outdoors and that shooting was not something to be taken lightly.  You never shot anything that wasn’t taken home for the freezer.  He also spent a lot of time fishing with his daughter P.J.  He would come home after a long day, and she would drag him off to their favorite fishing hole in the McCullough Lake area.  Many memories were made during multi-family camping trips where the beer flowed and laughter was endless.

In November 2008, he suffered a stroke and then others followed.  Sutherland Hills Rest Home became his residence in September 2009, and he resided there until his passing.

The family thanks all of you that have taken the time to send flowers, phone, or send a card. When circumstances allow, we will have a gathering where we can all share the memory of a very special man.

To send a condolence, post a photo, or share a memory please scroll down to the section called “Condolences”.