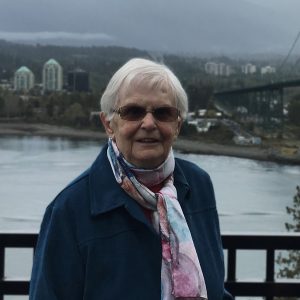 It is with great sadness we announce that on Monday, January 17, 2022 Annette Roy passed away peacefully with family at her side.

Born May 9, 1932 near Montmarte, Saskatchewan, Annette was the second of eleven children of Fred and Marie Perras. She grew up on a farm and at 26, she married Henry Roy on June 30, 1958. They moved to Las Pas, Manitoba where they started their family, having Florence, Allan, and Janet. In 1963, Annette and Henry with young family, moved to Kelowna BC where Diane was born in 1965. Also In 1965, they moved to Kitimat BC where Valerie was born in 1967. After moving to Terrace BC, Annette and family moved back to Kelowna in 1970 where she remained to her last day.

Annette was a gentle and soft-spoken soul. She worked hard raising five children and in the mid 1970s she started her career as a nursing assistant at the Kelowna General Hospital. She then worked at Cottonwoods Care Centre until the early 1990s when she retired. After retirement, Annette and Henry spent their winter months in Mesa, Arizona enjoying the warmer weather until Henry passed away in 1995. She also enjoyed bowling and getting together with her widow friends for Friday evening dinner.

During her time at Northwood Retirement Resort, Annette loved Saturday afternoon bingo and Wednesday afternoon social events. She also cherished time with her children, grandchildren, and great-grandchildren, which was especially true in the last few years.

Special thanks to Janet Roy who was instrumental in helping Annette during the 27 years after Henry passed away with her day-to-day needs and was always there for her. Also, a great thank you to Valerie Roy, who in the last few years was a great help to Annette.

A graveside service will be held for Annette on Monday, January 24 at 10am PST at Kelowna Memorial Park Cemetery.

In lieu of flowers, donations may be made to the Kelowna General Hospital Foundation in memory of Annette.