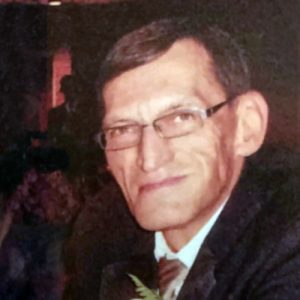 On October 15, 2022, Ron Sarnecki passed away peacefully at Kelowna General Hospital at the age of 73, on October 15, 2022. He is survived by his three children, daughters Kristy (David) Redding and Kylene (Tyson) Chernask and son Ron (Kelly) Halwa; and his grandchildren Stella & Nico Redding, Carter & Christopher Chernask, and Kingstun & Tavius Halwa.

Born February 9, 1949, in Edmonton, AB, Ron was the youngest son of five siblings to Helen and Frank Sarnecki. He is survived by his three siblings, Brian Sarnecki, Donald Sarnecki and Donna Ekstrom.

Ron grew up in Calmar, Alberta and held a fondness for his hometown along with his favourite hockey team, the Edmonton Oilers.  He loved playing hockey and continued to be an avid sports fan, adding football to his love of sports. His love of country music can also be traced back to these humble beginnings along with trucker hats, of which he leaves many vintage ones behind.

Fast-forward to meeting the love of his life, Dianne Polovejchuk, who he married in Vernon, BC on November 12, 1976. Dianne and Ron began their lives together in BC and Alberta, and ultimately decided to plant their roots in the beautiful Okanagan.  He was married for 44 years until he was widowed in November 2020, which left him heartbroken.

Ron’s greatest pride and joy were his three incredible children, Kristy, Kylene, and Ron, and six amazing grandchildren.  Ron loved watching his grandson’s early morning hockey games, he loved to make his grandchildren laugh when they were babies, and he enjoyed walks by the ocean with his grandsons who lived in Campbell River. Listening to country music in his chair with a cup of coffee was one of his favourite pastimes.

We would like to express our deepest gratitude to the staff at Orchard Gardens, in particular Brett DeWitt and Farid Nouisser, for their kindness and supportive, caring environment. We would also like to thank all the remarkable staff at the Shoppers Drug Mart pharmacy Willow Park location, for their patience, professionalism, and kindness.  As well, we would like to thank Kelowna General Hospital staff, in particular, clinical nurse leader Kim Bodnar, for her amazing expertise, compassion, and unconditional love and support during Ron’s last days, as well as Dr. Param Bains-Kinsella, Cheryl Robinson, and Judy Ireland for their unwavering support and care.

Dad, may you rest in peace and love with mom, grandma, and grandpa.

Family and friends will honour him, each in their own way. No formal service will be held.